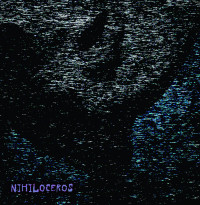 Self Destroy is the latest release of the Brooklyn-scene champions Nihiloceros. (That’s Nye-hill-aw-ser-us…like an apathetic rhino just fighting to see another day). Though this is the band’s 3rd release, it feels like a metamorphosis into their final form. With the addition of cutting bass leads, guest vocalists, catchy chorus lines, and strong backups, this feels like the sound that Nihiloceros was striving for. If I had to sum up Self Destroy in 2 words it would be “harmonized dissonance”...it may not hit you right away, but given enough time to grow on you, it will surely hit.

When the release first touched my ears back in September of 2021, I was a little put off at first by the unconventional choral lines and noisiness–often what I expected to happen didn’t quite happen. Upon revisiting the record and given time to chew it out, I realized how close-minded I was by unconsciously inserting myself as the producer. It was much better (and easier) to sit back and really let the band take me where they are trying to go rather than trying to guess it for myself. Thematically and lyrically, Self Destroy isn’t going to make it easy to figure out, but there should be a ‘eureka’ moment when the melodies start to familiarize themselves and the listener can get taken for a ride. The lyrics give a true nod to the Cobain aesthetic as well as the 80’s MPLS-styles with descriptions of eclectic environments paired with inner discontents.

Leading off the release, Dirty Homes introduces us to the variety of guitar & bass tones that force attentiveness in an uplifting way. The harmonies immediately drew me in–and thankfully this is something that reoccurs in the songs to come. The next couple of tracks feature trading lead vocal lines as well as some guest vocal spots to just keep piling on to the magnetic harmonies of different voices.

The intersection of Mammal Science Fiction and Halfway Human has to be the climax of this release–especially having it at the midway point of the record. The groove of one leading into the heaviness of the other is a real testament to how Nihiloceros can change their style and keep the same intensity. If you listen to nothing else from this record (which would be a real disservice), the bridge featuring Gillian Visco is one of the more infectious sections that could be the gateway to revisiting this album later on.

My only complaint with this record is wishing it was longer, but hopefully, these guys will be coming out with something again soon.