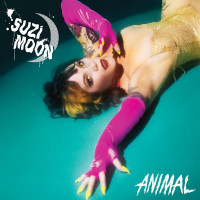 Suzi Moon’s second ep, Animal makes the argument that humans are not quite as evolved as they think they are. All three of the tracks here contemplate mankind’s three great motives- sex, power, money- and each time each issue is addressed, it’s from the primal perspective and not the intellectual viewpoint.

Suzi and the band charge forward in a combination of early punk and pre-punk rockage. There are obvious influences from the Runaways and the Stooges here, and they use those tools to build simple, but catchy melodies while Suzi howls and coos over the top. Each track has a momentum that comes more from the primeval than the present and it’s an effective way to get to muscles moving before the brain.

Of course, Suzi and crew know what they’re doing here and that’s apparent by the theme that runs through the album. “Sonic Attraction” is built around the concept that pheromones or genes or something else controls one’s desires more than conscious thought while “Animal” talks about wanting to control, devour, and destroy for… and unknown reason… one things about how Gorillas or Lions will beat up on smaller fellows- do they think to themselves “I must thrash this smaller gorilla or else he might be a challenger?” or do they just smash because they are wired to smash and that’s the end of it? The band is aware of this dynamic so instead of just spitting out that question, which would probably be a little more sophomore, they let the example do the talking. It works because there’s a depth in the simplicity and it makes you (me, the listener) feel “smart” for recognizing the theme- yet again, the primal reaction is charged, so you could argue the album works on the meta level as well.

The real heavy hitter here is paradoxically the lightest cut, “Gold Record Autograph.” Whereas the other tunes pull from burly punching (sonically, Joan Jett is pretty burly I’ll add), GRA is more along the Cheap Trick and Plimsouls vibe as it talks about wanting to break free from the “real world” as a musician and the challenges therefor presented. Also, the bright, melodic guitar lines throw back to the brief time when hard rock took note of the effectiveness of punk and tried to apply that form in a more mainstream angle. It also might be Suzi’s best vocal performance yet.

Now with two Eps out in the world, the Suzi Moon band have proven that they can rock with the best of them. If they put out a full album of this caliber material it would be great… but if they could mix these tight rockers with a few uncharacteristic or unexpected twists on an LP, it would be even better. To that end, one does wonder if an eventual LP will be plotted by the mind or the heart, and which one is more willing to take the risk to color outside of the lines on the long play format?

The Good The Bad And The Zugly: Research And Destroy