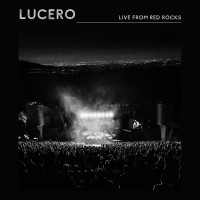 Looking back through their history as a band up until now, it is easy to agree with the statement that Lucero is one of the hardest working touring bands in America. This has been thrown around by several publications and critics, plus their die-hard fans, so the band must be doing something right. It is good to see such a success story unfold over the last two decades, especially since they have had their quasi rise to fame documented over the years. A look back at the live album/documentary Dreaming In America from 2005 partly covers their attempt at going major label, with a few members of the band expressing hesitation because they did not want to alienate their fan base and a possible attempt by the label at changing their sound. While the partnership only lasted for one album, 2009’s great 1372 Overton Park, the band has continued on as an underground favorite, steadily releasing albums and touring relentlessly. That brings us to the album in review today, Live From Red Rocks, released in December of last year.

Performing at Red Rocks is an honor for any band, so getting to hear Lucero experience it is a treat. The delight in frontman Ben Nichols’s voice from the jump as he thanks the crowd “for not forgetting about us, y’all” before going into “For The Lonely Ones” is pretty heartwarming. This being a live show, the listener does not get to experience the energy of being there in person, obviously, but the banter throughout the set gives a slight connection to the band because of how genuinely excited and thankful they are to be there. The recording of the songs themselves is crystal clear with everything on stage being properly mic’d, so everything is captured, which is especially true of Nichols’s signature raspy voice as it sometimes struggles to hit certain notes. While that may sound like a knock, it actually adds authenticity to the performance. They are up there having fun; while some performers are critical of a perfect performance, Lucero are hammering their set out and connecting with the crowd. One instance that made it on the album is during “Cover Me”, when Nichols forgets the beginning of a verse and states “It’s all gone...it’s all gone. I had to fuck up something!”. Not saying they are not professionals; they roll with the punches that sometimes arise during a set and laugh about it.

What separates this live album from any others they have done is that a third of the songs come from their latest album When You Found Me, which was written in isolation during the pandemic by Nichols. The alum boasts a shift in sound towards a darker and more lush atmosphere with 80’s adjacent synths. The band’s instrumentation has expanded at times over the years, sometimes having a horn section (the lone sax player on this live set adds a bit of depth to the few songs they appear on) and lap steel to bring out a more Memphis soul feel. The addition of keyboardist Rick Steff albums ago definitely gave them more room to play around, but with the new material and key sound, they found a new level. Nichols explains they are trying them out to see how they do live. The crowd seems into them, but not so much as their more raucous numbers. Lucero have so many fan favorite songs that it would be hard to cram everything into the set time that Red Rocks gave them, so devoting a good amount to new material is risky, but at the same time, it is great to hear the interpretation of songs written in a specific bubble grow on stage. The new songs set a more sinister tone, but when they kick in, they hit hard.

Overall, the album flies by. Fans of the band will appreciate having something new to listen to and will enjoy the band getting back to doing what they know best after so many months off the road. If you are new listener, check out their last live album Live From Atlanta for a more inclusive set of popular songs, being thirty-two tracks long, but there is still quite a bit of good stuff to take in on this one. Lucero started out as a scrappy country punk band, but have grown into so much more, while still staying connected to those roots. This is just another window into their hopefully long and ever evolving career.