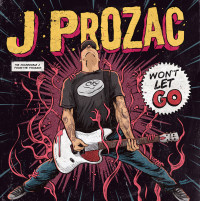 J Prozac is no stranger to the punk rock community. He has been in a staple in the pop punk and Ramonecore scene for decades. His current staple the Prozacs have released five proper full length albums on top of countless 7" singles, splits and compilation appearances. For those unaware, Jay always gets personal and emotional in his lyrics. His compositions read like an auto biography. He is a passionate musician who tries to fit it all in while serving as a loyal family man. Many of us can relate. "Won't Let Go" follows in that pattern and goes even deeper into the soul of J Prozac.


The title track "Won't Let Go" kicks things off. This song commences with a steady beat and signature pop punk guitar lead in the intro. This song seems to be an homage to the bands who have inspired him throughout the years and serve as the fuel for continuing to play punk rock. The vocal line of "This is in our hearts" is repeated throughout the track. "For the World" is a power pop track which appears to be dedicated to his wife, with whom he plays in the band Stiletto Bomb. This number is about their hectic life together raising a family and how they would not trade it for anything. "Regret" was the first single off this album. This one sounds the most like a Prozacs standard which at first worried me for this release. Don't get me wrong as this is a solid track. I feared the album would be nothing more than a Prozacs album under the J Prozac name. It is not. This track though has all the starts, stops and whoa's the Prozacs are known for. "Claustrophobic" seems to be new territory for J Prozac. This slow and dark tune gets more personal in dealing with the hardships of completing what you started. We have all felt this way like the walls were closing in on us. Vocally and musically this track is reminiscent of newer Screeching Weasel. The album gets more upbeat on "People I Know" which follows. This is one of the most fun and standout tracks on this release. This song is literally singing about people that you know! J Prozac's son Kody makes a vocal appearance on the second verse and does a great job. "Days Go By" takes the pace down a little in tempo and subject matter. Jay remembers people he has lost on this track. The song starts acoustically and then goes mid-tempo when the band eventually kicks in. The tempo kicks up a notch on "Beat Of Our Hearts" that follows. This hard rocking number showcases the rhythm section as well as boasts impressive guitar leads throughout. "Building Blocks" is a mid-paced power pop anthem which is another album standout track. This is an inspirational number about creating something special out of starting simple. Kody makes a return on vocals as well. "Here With Me" is a standard pop punk song complete with cool chord changes throughout. J Prozac tackles the Dirt Bike Annie track "Thirteen Days." This is a steady rocker which fits the style of the album rather well. This is a song about being on the road. The album's closer "No Matter" tells the tale of the struggle of trying to keep a band together. Those familiar with the Prozacs have most likely lost track of all the band's members throughout the years. This is a hard hitting number which carries this to conclusion. It should be pointed out that both current and past Prozacs members rightfully serve as J Prozac's backing band on this album.

Many claim that pop punk and Ramonescore suffer from depth conceptually and lyrically. I feel that J Prozac smashes that while opening his heart and emotions through his songs. This album takes you deep into those things that make Jay happy as well as stay awake at night and everything in between. This album stands well on its own outside of the Prozacs catalog. Any fan of 90's style pop punk or his previous efforts should give this a listen.