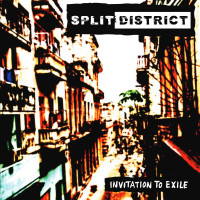 Sheboygan, Wisconsin's Split District has sewn over forty years of musicianship, and most recent bands Radio Hate, and the Darbs, into Invitation to Exile.

The LP spirals in with "Another Road," showcasing classic punk-rock 4/4's and gang vocal hooks before dissolving into the precise dueling guitar opener of the title track. The (very fun) number is followed by "Start at Zero," tacking another catchy sing-along to a pitted bass guitar production from vocalist John Michels, "In The Weeds" has the best riff of the twelve, channeling O.G. A.F.I. or eldest Misfits.

"A Show of Hands" opens with branded toms from drummer Matt Planton, and another group delivery so cohesive you can smell the stale beer hall. The intro to "Out to Lunch" is killer, and its poppier melody stacks against the tough riffage of "It Ain't No Fun" quite nicely. "The Villain's in the Car" ramps the tempo to the highest bpm thus far, and is a wonderful two minutes of the record.

"We'll Take You Home" rows another three minute standard into another choice intro, compliments of Planton's drumming on "A Common Theme," a haunting build that was my absolute favorite of the bunch. "It's Coming On" stomps on for another fun 2:30 before closer "Take This" sends the half hour full length home with more hooks and an outro full of trick plays.

Invitation to Exile is A-1 elementary punk rock for fans of early Teen Idols, T.S.O.L., or Ten Foot Pole. It is unapologetically simple, yet it is that simplicity that makes Split District as charming as they are timeless. Fun listen.