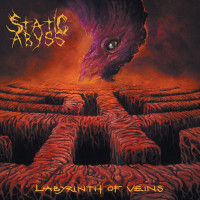 Have you ever thought to yourself, ‘Boy, I sure could do with listening to the gloomiest and the most frenetic types of death metal right now, but I only have about 40 minutes in which to do it’ because believe it or not, I actually have. I may or may not be the only one, but that’s not really the point. the point is that although those things exist in the same umbrella genre, they’re pretty different. Worm and 200 Stab Wounds sound pretty fucking different to someone who listens to both. And there’s a mottled purity to both styles. 200 Stab Wounds is crowdkilling/gym/party music. Worm is slow head-banging, contemplative, introspection music. Yet borne of the same genre. You see my point, right?

Static Abyss are a new proposition. Kind of. Static Abyss is two of the current members of Autopsy. One of whom, Greg Wilkinson has only been a member since 2021. He is however, also a current or ex-member of about a dozen other bands as well as running arguably the Bay Area’s heaviest studio, Earhammer, for over 15 years. So it’s not unreasonable to say this guy knows his shit. The second member of Static Abyss is drummer/vocalist Chris Reifert, who has been on vocal and drum duties with Autopsy since the late 80’s. And so comes my confession. This record was initially pitched in the press notes as death doom. And I’m a BIG fan of the sub-genre. But it occurred to my bullshit prejudiced mind that maybe Static Abyss were operating at the doomier end of the spectrum might because the guys involved had lost a step or two of pace. You know, it probably does a person no harm to look foolish once in a while.

I’m delighted to say my preconceptions could not have been further from the truth. This record has urgency, anger, hate and fire in its belly. The death doom tag is at best a small portion of the story. The tracks basically take whatever tempo or tone they need to. And coming from 2 people so experienced and familiar with the wider scene, where in more eager or amateurish hands this might fail under the weight of its apparent breadth of influence, Static Abyss manage to sound both not only unaffected, but as if the myriad variations on a theme were their own ideas. As if these digressions from an 80’s template are their own. And arguably therein lies the truth of this record’s quality.

The mere 2 people involved in the creation of this record have been there. They’ve seen it. They’ve done it. In some cases, they arguably helped invent it. And so this record has an ‘OG’ quality to it. But sounds like it could have been made by 22-year olds, such is the vitality of it. I can only deduce from this, that death metal and continuous experimentation within its walls, is the source of eternal youth. Now I come to think of it, the other band who seemingly defy age more than any other are Sick Of It All. So death metal approached with vigour and a true love of the genre…and hardcore; delivered with authenticity, both seem to sustain bands. Assuming this hypothesis is true, then I look forward to the 17th album from Static Abyss as much as I’ve enjoyed the first.