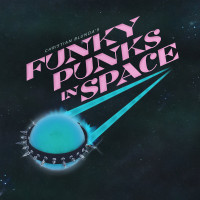 Has anyone ever mixed the melancholy with the wacky fun like this before? Funky Punks in Space is the latest solo record by Christian of Mean Jeans. Recorded in (mostly) isolation during covid lockdown, the album finds Blunda looking inward and outward, and also trying to distract himself from deep contemplation by thinking about junk culture. As with many Mean Jeans albums, the hook is that it’s an artist trying to look like a bonehead while secretively having the in-depth re-flection of say, Neutral Milk Hotel or Adele- but the second hook, which is new, is that Blunda fully embraces an ‘80s style instead of just flirting with it. It works really, really, really well.

At the album’s core is classic Mean jeans style Ramonescore. Pretty much all of the tracks charge forward, mostly with a buzzsaw guitar. And those that don’t have the buzzsaw rip, have that tool supplanted by a synth, which also charges and throbs, resulting in a compu-approximation of Johnny R’s strike. But, where this album separates itself from Blunda’s previous work sonically in that he goes all-in on the 80s sound. The entire album is permeated with Dead or Alive and New Order style synth beats (the killer “I’m an alien” specifically has a Factory records aesthetic). Blunda clearly has an affinity for this once denigrated, now celebrated, style of music. But wisely, he doesn’t take himself too seriously with homages (…cough … cough… a certain bay area former hardcore band might take note…) but he doesn’t do a pisstake either. Rather, he’s fully aware of just how fun the bumpin’ dance beats can be and lays them on thick- but not too thick- so that all of these songs achieve very rarified air- they successfully bind rock and dance music- almost no one else has done this. Even New Order, the guys that can up with this concept, don’t always do it was well as Blunda does.

And yet, there’s the twist. The tracks are fast, fun, and funny. But underneath it all, is cosmic contemplation- just check out the title of the album. “Inside a black hole” opens with the downhearted “I couldn’t find meaning in existence, it’s a mystery.” Shortly thereafter, Blunda asks if the answer is “inside a black hole.” That could be goth levels of misery or it could just be a winking nod towards camp sci-fi… except he later adds “I want to believe there is other life / I’m ready to go now to the other side.” WHOA. Frikkin’ WHOA. You could take that at face value or you could take that to mean something very dire. This really shows Blunda’s mastery as a songwriter. The lyrics here are all pretty utilitarian in that there’s not a lot of flowery prose. But, when you really look at the simple statements herein, they suddenly become not so simple and have a duality that comments on man’s existence in itself.

Of course, instead of doing a full album of mental-heaviness, Blunda does throw in some yuks to keep you guessing at how deep his questioning goes. “Chain wallet in zero gravity,” which has maybe the best beat on the album, is about leaving the earth while one’s biker wallet flops around the space ship. It’s a tiny detail that can be unfolded to paint an entire picture. In one sentence, Blunda sums up the album’s entire aesthetic quite masterfully. I also love the Zapp and Roger vocoder vocals. There is some serious messaging here, but there’s a bright spackle of fun slathered over the top.

Funky Punks in Space’s effectiveness comes from Blunda’s ability to put the silly and serious so close together that you’re never sure which is which- and the funky, funky beats, too. But that does raise the question- does Blunda keep throwing bunny ears behind the serious stuff because he feels the singer-songwriter approach is too self-indulgent… or because extended self-analysis is too painful to endure?