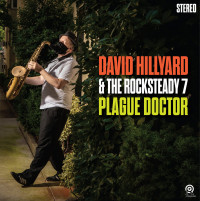 Dave Hillyard and the Rocksteady 7

At some point in the mid-nineties, third wave ska was everywhere. It was the upbeat counterpoint to grunge. There were, and remain, bands in the genre who were creative and made great music. As the genre peaked in popularity though, so did pop-punk bands adding a horn section at the behest of major record labels looking to make a quick buck off the current big thing. By the late nineties, ska had become a parody of itself. It was long removed from the days of Jamaican Ska and Two-Tone Ska. Save for high school band geeks, like myself, third-wave ska was dead by the turn of the century.

It would be a few years later I started discovering there were contemporary bands more focused on the Two-Tone and Jamaican Ska side of things. My musical repitoire had also grown to include rhythm and blues and jazz by this point. It was at this time I started realizing some of the really good ska bands had band leaders similar to the genres they drew from. They'd lead the band in and out of solos and more structured musical vignettes. It was around this time I discovered The Slackers and Dave Hillyard and the Rocksteady 7. The newest Dave Hillyard album shows him coming into his own as a band leader.

On their latest release, Plague Doctor, the music is surprisingly light despite the title. The combination of ska, jazz, and what sounds like South American rhythms made this the perfect album to check out as temperatures started rising in southwestern Ohio. This sounds poised to be a summer staple for ska fans this summer.

Members of musical brothers in arms, The Slackers, turn up on a few tracks as does Larry McDonald. McDonald is a percussionist most well known for his work with Toots and The Maytals, Gil Scott-Heron, and Lee "Scratch" Perry. The use of the core band and incorporation of guest stars  in key areas further shows Hillyard's abilities as not only a band leader.

This album is a great listen whether you're looking for something laid back to listen to on the way home from a show, something to throw on in the background at a party, or you're just looking to listen to some solid ska.