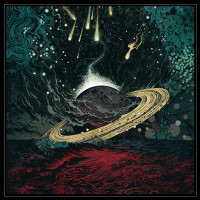 I really don’t know how I got to almost forty without having made a sustained effort to listen to Cave In. I think it might be a little bit like when you lend someone something and as time goes on you’re increasingly less likely to ask for it back, leading inevitably to an acceptance that maybe it’s their thing now. Not yours. I saw so many people be so vehemently positive and committed to Cave In, I felt that as an objective Johnny-come-lately, I would never be able to love them the way they do, or have the relationship that they do with them. I had even come to peace with it, understanding as I did, that “Final Transmission”, more a collection of final recordings with the late Caleb Scofield than a fully realised album, was exactly as its name suggested.

The influence and story of Cave In and their various members extends beyond a single band however, and consequently I have heard scatterings of their playing and work over the years. But this is my first time listening to a Cave In album more than once, in totality. As a person who listens to a lot of records, many of which in the extreme metal realm, then the 70-minute runtime of Heavy Pendulum was initially a little daunting. Twinned with my lack of history with Cave In and the routine adoration I see for them, this meant really getting to grips with this record felt like quite a task. However, from the first second it was clear I needn’t have worried. The tone on Brodsky’s opening staccato riff is relatively clean but could literally not have any more crunch to it. The metronomic approach to the riff and its ubiquity immediately reminded me of Green Machine by Kyuss. Not a bad start, then.

A couple of things struck me when listening to this record. Firstly, how incredibly complete and unaffected it sounds by recent musical fads or stylistic shifts. It has a timeless quality that comes from just being built of the best fundamentals of thoughtful, heavy music. There is also an innate cool that exists in this record (and this band). It doesn’t use heavy for heavy’s sake. It is a rock record played immaculately by seasoned professionals and written (primarily, but not entirely) by a borderline savant in Stephen Brodsky. It is overflowing with melody and each song feels like it has simply been willed into existence such is the organic, naturalistic nature of them. The other thing that has occurred to me is how many bands or records I’ve been reminded of when listening to it. They include Screaming Trees, Oasis, Alice In Chains, Mastodon, QOTSA, Lynyrd Skynyrd, Black Peaks, even G’n’R. The songs range in length from quasi-interludes like “Pendulambient” at sub-2 minutes, all the way up to closer “Wavering Angels” which tips the scales at over 12 minutes. (More on that later)

So, over 70 minutes, 14 songs, various styles, structures and tempos. Can it possibly feel cohesive? Somehow the gulfs between those elements remain, but thanks to an intangible yet crystal clear character, the songs, in the hands of Brodsky and co, traverse those distances with extraordinary ease. Making the slow, Southern rock of “Reckoning” entirely compatible with the rolling riffery and casual brilliance of “Careless Offering”; and the crunching, woozy psychedelia of “Nightmare Eyes” bafflingly comfortable bedfellows. Rarely have I heard a record with fundamentally consistent ingredients sound so dynamic and still retain a definite identity. It’s curiously hard to pinpoint what makes that identity though. The overall ambience is an amalgam of desert rock, southern metal, grunge, and hardcore. But with sprinkles of classic rock…in its soul, more than the construction of the music, though. As I say, it’s hard to put your finger on, but it’s fun to try.

I think I need to talk about album closer “Wavering Angels” for a little while. It is a truly extraordinary piece of songwriting. It is lovelorn, majestic, melancholic and utterly transportative. It is a true epic rock ballad, cut from the same cloth as Stairway or even Freebird, but with a sting in the tail. When the ‘Brodsky tone’ turns up over 4 minutes in, the tempo shifts, the mood becomes altogether more biting and you’re suddenly in a totally different song. And when the solo kicks in more than 8 minutes in? Well. It’s triumphant, nuanced and elevates the song so much that you remember why solos can be so important. The twin lead lines that ring the song, and the album, through its final stages, occasionally with layered vocals interjected, are simply some of the most emotionally momentous minutes in rock music in recent years.

Obviously, I feel like a fool. Where I thought that Cave In may prove elusive or impenetrable to me, I sit here now, listening to a record that is immediate, accessible, heavy and gentle in equal measures. And that I have no doubt whatsoever will stand the test of time better than probably any other record released this year. I will also be in a good place to confirm if that is indeed the case in future, because I can say with absolute certainty, I will be listening to it for many years to come.

A Wilhelm Scream: Lose Your Delusion