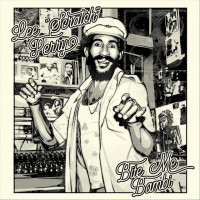 Bite Me Bambi’s “Crazy” 7-inch has the distinctive claim of being the last piece of music the iconic Lee “Scratch” Perry ever worked on, with LSP having sadly left us at 85. What makes the release doubly curious is that while Perry, in his later years, mostly “collaborated” by laying down impromptu vocals on top of music supplied to him in a remote studio, here he remixed the title track. This may be particularly relevant because, as unique and as clever and weird as Perry’s vocals are, his greatest contribution to music is probably through his production and remix skills, and his vast vision, as opposed to his singing (which honestly, was pretty unique and cool, too).

The new version of “Crazy” finds Perry and the crew stripping back the original’s main coat. The original had a two-tone vibe that walked between Specials clean strike and Madness broad melody in sound. In lieu of that, the new version has some twisting and plucking sound effects in the background that gives the track and jumpier and frankly, almost dancehall feel. In fact, the sound is such classically crafted snapper that it can be bent in several ways and maybe could have even been a dancehall smasher, despite BMB’s penchant for two-tone and third wave purity. I also like how the song has a sort of innocent aspect “I’m crazy for you,” only for the subject of the song to then whisper “I’ll be watching you and everything you do…” meaning our character actually is CRAZY and thereby gives the tune a more sinister vibe.

Classic Scratch mixes were reknown for their massive dread heaviness and eccentricities- i.e. cows mooing, lightbulbs being smashed, entire conversations mixed into the middle of songs. More recent material tends to be more spartan and more avant-garde, to the point where many later day Upsetter mixes were less music than sonic experiment. Interestingly though, the “Crazy” remix seems much more pop-oriented than either Upsetter approach. One does wonder if the remix here was Scratch sitting at the board, furiously mixing live to tape a la 1978, or someone saying “Hey, uh, Scratch, should we put a funky guitar in the background here?” and Scratch just nodding. This doesn’t approach the massive dub recut power of a track like “Disco Devil,” but it does sound pretty good. In a way, Scratch’s level of interaction isn’t super important- it is nice that the band saluted the greatest producer ever while he was still alive and let him know that he was appreciated while he was still around. On those points alone, this release is worthwhile. Plus, the remixed tune is one of the few remixes where it’s better than the original (which in of itself is a good ska striker). I’ll also add that it is by far one of the best LSP collabs from the past five years or so, which have been VERY hit or miss.

The flipside is a fitting tribute to LSP again. BMB take on Perry and Junior Murvin’s “Police and thieves” and do a really nice job. They don’t do anything radically unexpected, but they thankfully opt for the Murvin version, with the light, cloud floating guitar lines, instead of the hard hitting Clash version. That is, this is more of a reggae appreciation track than a punk-as-reggae nod. Also, just as Murvin had an angelic voice, singer Tahlena has an excellent set of pipes, which, while more fuller than Murvin, makes it a point to give the song the gravitas that it deserves. I mean, listen to the lyrics- they are fundamentally deep and important.

I mean this as constructive criticism. BMB is a great band that writes great songs and their singer is pro-level. The weakness of their first LP was that, for me, everything was too perfect, to bright and shiny, and too bubblegum. The band seemed to be leaning so hard into early third-wave aesthetic that while it was all very polished and precise, it didn’t move the spirit. I’m glad to see that by linking up with the Son of Thunder, Pipecock Jackxon, Mister Rainford, Baby Krishna, the MADMAN, some of the sheen has been knocked off. The band is now adding some danger and soul to their tuneage, which really, if you ask me, is all they need to do to go from good to great.