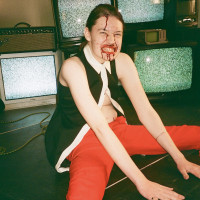 On their excellent sophomore album, 2020’s Jon Spencer-produced Skin Suit, Woodstock NY’s The Bobby Lees locked onto a bluesy garage punk sound with a healthy injection of weirdness (eg. intense whispery vocal bridges, toy piano floating into a song or two, and a Cramps-like pisstake dirge that somehow makes ranch dressing seem even more disgusting). Those sort of deviations pushed what could have been an easily likable but forgettable record into being one of my favorites of the past few years.

Now on the Hollywood Junkyard EP, their first release for Ipecac Recordings, the Bobby Lees lean into the weirdness. They explore a different new corner of their sound on each of the songs here, and all of the experiments work. The title track might be the most ambitious thing they’ve done so far, with dramatic verses building up to a memorable big chorus. Paired with the elaborate video the band shot for this song, it feels like it could be a breakthrough hit in some universe where the kids are still into loud guitar music.

“Strange Days” (which is not a Doors cover) is probably the biggest departure from their previous work. It’s relatively quiet and piano driven and reminds me of PJ Harvey if she had usurped the Bad Seeds from Nick Cave back in the 90s. On the virtual flip side, “Dig Your Hips” is a faster rocker, more along the lines of the Bobby Lees’ earlier work, proving they haven’t lost their intensity while expanding their style.

The closing song is a cover of “Be My Enemy”, originally done by Scottish alternative/folk rockers the Waterboys in 1985. It was already a harder-than-average entry in the Waterboys catalog, sounding like Bob Dylan trying to do a Motörhead song. That description works here too, with the Bobby Lees pushing the Motörhead flourishes even more.

This one’s digital only at the moment, but the rumor is it’s a tease for an upcoming LP. If the full album they’re working on (presumably also for Ipecac) can maintain this level of diversity and songwriting quality, this EP might serve as your last chance to say you were ahead of the curve.