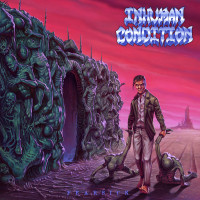 Straight off the bat, a disclaimer; I fell hard and fast for Inhuman Condition’s debut record, Rat God, last year. So much so that it cracked the Top 5 in my records of the year. It was also my favourite death metal record of the year, which was kind of big for me as that was my most listened to genre of the 12 months in question and Inhuman Condition didn’t even exist a few years ago. So I was massively stoked to learn that album no.2 was following so swiftly afterwards and even more stoked to receive it way back in early March. So, I’m saying; yes I was super hyped about this record, but no, this is not a knee-jerk review based on initial impressions. I appreciate this disclaimer might constitute a spoiler but fuck it.

Aesthetically speaking, I was absolutely delighted to see that the evil, suited dude from the first record’s artwork had made a welcome return. Suggesting that thematically, the band were going to stick with the ‘love letter to 90’s death metal’ approach that made the debut so fun and addictive. It’s clear from the get-go that the band’s deep love for that style hasn’t waned in the relatively short period between records (hardly surprising given the reception to the debut and the history of the band’s members) but the question for me was always whether Inhuman Condition could replicate the immaculately balanced results of the debut. It’s a lot to ask, let’s be honest. At the time of writing, the buzz record in the world of death metal is (quite rightly) Undeath’s sophomore effort (It’s Time To Rise…From The Grave!) which succeeds so completely on a bedrock of fun, a deep love of the art form and magnificently kinetic grooves. And just being blunt, Inhuman Condition have got those things as well. In no short supply. They undeniably live in a slightly more thrash-tinged portion of the death metal world, but their energy, lyrics and general tone are pure, gleeful death metal and the band’s members clearly delight in that fact.

Firstly, to the things I adore from the debut that remain; the fact that Jeramie Kling’s lyrics are entirely intelligible. It brings the songs to life and gives him a role akin to a macabre raconteur which I find irresistible and lights up the exact same synapses as watching The Evil Dead. As I alluded to before, the rhythmic and groove approach the record takes is pretty much flawless. Varied, but always easy to latch onto. The versatility of the rhythm section (Kling, and of course the masterful Terry Butler of Obituary, Death, Massacre, etc on bass) lay a syncopated, thrilling base for the inimitable Taylor Nordberg to yet again display why he is one of the most indispensable death metal musicians of the last 10 years or more. Together, they remind me of Streets of Rage. On the face of it, simplistic, but there is incredible craft behind that artifice. Also, they both marry brutality with continual, fluorescent gratification. I used to play that game for days on end; and in the same way I can listen to these songs interminably and find cool bits that put a shit-eating grin on my face every time.

Whether the band had a heap of demos and trimmed down to these nine or headed to the studio with just these nine is basically immaterial because each would be hugely impressive in different ways. The red-blooded swagger and first hilariously grim lyrical utterings of “I’m Now The Monster” are putridly joyful, the shameless, warbling series of dive-bombs less than a minute into “Caustic Vomit Reveries” demonstrates the swivel-eyed lunacy and boundless enthusiasm of the band, the shuffling groove of “Recycled Hate” is impossible to stay still while listening to and the intermittent Obituary-esque moderation of pace that might as well be designed to deliver stinkface direct to the listener…? I could go on.

How impressive the record is, is not borne of just one thing. There are inventive and clearly-defined solos, four-four stomps the like of which I haven’t heard since the last record, cool as shit lyrical lines, grimy death goodness and that thrash, or maybe crossover, undercurrent which pierces through the congealed surface of this record from time to time and brings with it a neon blast of wild excitement, a surge of energy that is less The Wicker Man (the crap Nicholas Cage remake) and more Mandy (the Nicholas Cage psychedelic revenge gore-fest). You have probably ascertained by now that I’m a bit of a fan. That is unquestionably true. I am. I honestly think I’ll listen to these records (this and the debut) for many years. And here is where my only, small, reservation lies. Both records have been superb. Brief, immaculate servings of death metal that deliver adrenaline, grime, gore…but with a sleazy smile. So, the question is, where do Inhuman Condition go from here? Being candid, I don’t want them to go anywhere. I know that’s not very professional for me as a journalist, but if they want to keep dropping nine or ten track death metal records every few years that feel like a coked-up Bruce Campbell strutting around smashing zombie heads in, then not only will I be happy, I will do whatever I can to encourage and support that.