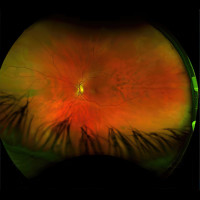 When The Dillinger Escape Plan bowed out, arguably at the top of their game and in one of the most graceful and well-orchestrated ways the music world had ever seen in 2017, I don’t know that many people would have dared imagine either the diversity or the prolific nature of Greg Puciato’s output in the years to follow. The often feral and always magnetic frontman was of course present for the lion’s share of Dillinger’s musical odyssey and of course there are very clear shifts in sound across their catalogue, but in a relatively brief space of time, Greg has released two solo records, continued his work with The Black Queen, released another (excellent) Killer Be Killed record and lent his talents to myriad other artists including Jerry Cantrell, Carpenter Brut and even the OST for Dark Knights Death Metal. So as much as few would have been so bold as to assume this level of creativity or output, I think even fewer truly knew the depth of Greg’s talent.

Mirrorcell is a more concise record than 2020’s Child Soldier: Creator of God which, at 15 tracks and 64 minutes did receive some criticism for being if not bloated, certainly a little flabby in parts. Mirrorcell in comparison is a featherweight 9 tracks and 44 minutes. And one of those tracks is album opener/intro track “In This Hell You Find Yourself”, so we have 8 fully formed tracks here. And to my mind, what Greg achieves across those tracks is beyond what he manages in the debut. I will admit that I have a fondness for brevity, but these tracks are in and of themselves not wilfully swift in any way. They simply feel able to grow organically and run their course perfectly. I could speculate that the debut solo record was an outpouring of ideas, likely built up over years, that were successfully turned into songs. But now that logjam has been cleared, Greg has (despite the sub-2-year gestation period) seemingly been able to apply patience and arguably a greater sense of thematic consistency to this follow up. That’s not to say there aren’t huge swings of style and delivery, but they happen more subtly. If you listen to the groove-driven slabs of guitar in first track proper “Reality Spiral” and then immediately skip to “We” with its processed beats, reverb-laden vocal and filmic, sexy intensity, then that change would be immediately apparent. Possibly even jarring. But the sequencing of the record is so perfect, that the gulf in styles is bridged seamlessly throughout the runtime.

I also just want to make it clear that everything that one hears on this record with the exception of the drums, was played by Greg. Including some glorious solos that fit immaculately with the songs in which they exist. Which makes sense, of course. I could liken it to when a filmmaker such as Stanley Kubrick, Robert Eggars, Julia Ducournau, etc are afforded the benefit of autering a piece of work in its entirety. Greg has proven himself not only worthy of that level of trust, but that he has the chops to carry it off without having to rely on session musicians, writers, etc. To bring this back to my earlier comments about the diversity of his recent work though, where I am most impressed is in the versatility on display. Yes, there are songs on here that I will probably come back to more than others, but I would also argue that the record succeeds consistently. Almost entirely. There are a few fleeting, moments where I feel that focus is lost just slightly. Album closer “All Waves to Nothing” which at close to nine minutes makes up a relatively significant position of the total runtime, is largely superb and a fitting denouement. But the first 3 mins feel basically detached from the remainder of the song. It is of course Greg’s prerogative as an artist to combine these styles, but for once it just feels bolted together. Of course, the first segment lends a counterpoint, but I’m not 100% sure it justifies itself. The last 5 minutes, even isolated, are a masterclass in emotive heavy rock songwriting, so maybe that adds to my disapproval.

Greg Puciato traverses hard rock/metal, sultry 80’s-inspired neon synth, balladry, dark pop (the utterly wonderful “Lowered” with Reba Myers of Code Orange is maybe the best example of this) and plenty more. But Greg is Greg. You know his voice. In its many different incarnations. And now, increasingly, I feel like I know his music, which is something I was less sure of after the debut. Something I am sure of is that in Greg Puciato we have something akin to a renaissance man for the heavy/alternative sphere. A musical polymath with a sense of identity and character that continues to grow and define itself. And one of those most defining characteristics is that of consistent quality. I know there are people who have been Greg fanatics for a very long time. I’m beginning to understand that they maybe had the perspicacity to see something I had not. Until now.