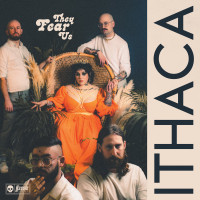 When I first heard about Ithaca (the band, as opposed to the Greek Island) around 2017 I wasin the midst of becoming familiar with several UK heavy bands that I continue to hold in very high esteem today. Svalbard (who I saw Ithaca support at the time), Employed To Serve, Palm Reader, Venom Prison and more besides. But if you look at that crop of bands, the potential that few would have denied, has largely been realised. Svalbard released an exquisite record in 2020 that has developed their sound in the best possible way. The same could be said of Palm Reader. Employed To Serve are currently playing in arenas supporting Gojira and Venom Prison have released a record earlier this year which will doubtless be cited as one of the high-water marks for UK metal come the end of the year. The other thing worth considering is that some of the most exciting rising stars of British metal operate in relatively similar fields to Ithaca. Those being mathy, challenging hardcore. (I’m referring to the likes of Pupil Slicer and Heriot.) So, this could be a pivotal point for Ithaca.

What I will say in opening, is that I don’t think there is any chance of Ithaca getting lost in amongst those bands mentioned above. Their sound has notably developed. The mathiness and signature panic chords are still there, but Sam and Will’s guitar work is now somehow more organic. The stabs and polyrhythmic riffs are present and correct, but the approach now feels so much bigger. The riffs don’t feel isolated, but like they are inseparable from the songs that they drive forward. And that sense of building the songs into something grander is maybe the single largest difference between this and the debut. Djamila’s vocal range is now almost unrecognisable in breadth and finesse compared to the band’s earlier material as well, however. Her cleans are mildly smoky but deeply soulful. Her screams are bellowed, heartfelt, barely contained manifestations of fury and frustration. Yet her diction means that the lyrics are always intelligible; something which could not always be said throughout The Language Of Injury. The contribution of Dom and James on bass and drums respectively needs to be acknowledged, too. Drawing the hooks out of complex material like this is notoriously difficult, but somehow it feels like an innate quality throughout They Fear Us. Though in this record, there is far more to consider than jagged hardcore. The title track/first single has all the hallmarks of the band, but there is a fluidity to the song which makes it irresistible. Sam’s main riff doesn’t stab so much as undulate. It writhes and flexes menacingly, like a constrictor. Djamila matches this fluidity with her vocal performance; confrontational yet capable of restraint and used to superb effect.

Sometimes when bands make a step towards the more melodic, then it can mean they lose some of the bite or impact they once had. That could not be further from the truth here. The focused savagery is there in abundance when Ithaca choose to use it (“The Camera Eats First” is a perfect example). Yes, it’s been honed, but it’s no less impactful. It’s like they’ve chromed the head of a previously weathered sledgehammer; it’s still going to smash your teeth in, but in the split-second before it does, you’re dazzled by its uncommon beauty. But I simply must talk about the unabashed melodic passages (the intro to “Fluorescent” for example). They are utterly mellifluous and satisfying. They hit in the way that pop songs can. Like the forlorn passages of the first two Funeral For A Friend records. They really work. They don’t feel like a compromise, or like just a ‘heavy’ band playing at being melodic. It feels entirely natural and like the band are just getting around to shining a light on a part of their game that has always been there. Immediately after “Fluorescent” you get “You Should Have Gone Back”, which for the first half of its runtime is a delicate, but subtly flamboyant instrumental (the lead guitar work is more guns ‘n’ roses than anything more mathy or hardcore-adjacent), which then explodes in the second half with Djamila’s arrival and the repeated screams of ‘We’ve got a problem / we’ve got a problem…’. The song then recedes again with washes of atmospheric guitars before the final, triumphant segment (complete with horns) closes out the track.

As gushing as I’ve been thus far, I still don’t think I’ve made it entirely clear how much I adore this record. There are influences that include 80’s pop, elements of industrial, soul, post-rock, modern metal, melodic hardcore, 00’s metalcore…and yet Ithaca can also write and perform songs that could fit in a Disney movie soundtrack and it all still makes sense. It all works. The record does such an absurd amount in its 35 minutes, that it should, on the face of it, feel too busy. Too confused, too crowded. But the sequencing means you get mathy chaos, anthems and gloriously emotive melodicism that all get equal billing. It’s clear that Ithaca are now so much more than they once were. They were always very good, but this is superb. I find it inconceivable that I won’t be looking back on this record in years to come as a record that introduced, with impeccable taste and craft, new elements to an already impressive sound, that it became something else entirely. Ithaca have brought a confident, lurid aesthetic to this album cycle and given how They Fear Us explodes from the speakers in full colour, HD, widescreen…there is a beautiful synergy in that as well. What a record and what a truly exciting band.