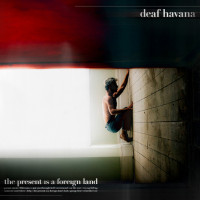 There was once a time when Deaf Havana were a very different band to that which we see today. That’s hardly surprising given their debut record came out in 2009, towards the end of what was frankly a creatively bereft period in Britrock. The radio and charts were full of insipid cookie cutter bands in identikit ‘rock star starter pack’ clothes and with songs to match. From the underground and in this barren environment, Deaf Havana emerged with a series of anthemic, youthful, emo-tinged post-hardcore hits that were played ad nauseum on Scuzz & Kerrang TV over here in the UK. To a greater or lesser degree, Deaf Havana has always been a vehicle for the musical talents of songwriter/vocalist/guitarist James Veck-Gilodi, who has been the only constant member since the band’s inception in 2005. Meaning that the change in style will also be attributed in large parts to James, of course.

In spite of the vigour of the first EP & debut record, only 2 years later, follow-up Fools and Worthless Liarswas an immediate departure from the early sound. It starts with a finger-picked acoustic track about James’ self-perceived lack of success; in apparent contrast to his friends. It felt like a bit of an odd choice at the time, but the songs on that record were good. Not great, but good. Then in another 2 years, Deaf Havana made explicit the implicit, naming their third album Old Souls and featuring even more acoustic guitar, all-out ballads and radio-baiting melodies. The mainstream responded to some extent and they appeared more and more in magazines and television, their music was used in soundtracks and the like. But then the prevailing musical consensus in the UK continued to veer away from guitar-based bands and Deaf Havana lurched towards possible obscurity. 2017 and 2018 saw the release of two more records, the latter of which, Rituals, clearly had the sticky fingerprints of a modern pop producer all over it. Synthesised, polished and pro-tooled to within an inch of its life, it was an example of what I find most depressing about bands growing older in the late 2010’s/early 2020’s. It felt cynical. A desperate, shameless cash grab akin to Jade Goody selling her story to the glossy magazines from her death bed. (Sorry, probably a very insular UK reference)

This hasn’t been much of a review yet has it? I apologise of course, but the background/context is so important for this record. I wouldn’t have even bothered listening to it were it not for morbid curiosity to be honest. Because in spite of myself, I really wanted to like this record. For James and his cohorts to have cast off the filthy, tarnished cloak of commercial interest. And I wish I could say that was the case. But let me at least give some credit. James’ voice and knack for a vocal hook is still absolutely immaculate. It is now predictably leaning far more into the soaring, pop-inflected area than I’d like, but occasionally, you still get a fleeting glimpse of what was once there. Maybe it’s just James’ vocal talents and penchant for a ballad that have led him to this place, but whatever the contributing factors, I can’t help but feel James’ apparent need to apologise, to explain, to discuss his own shortcomings in his lyrics, could be borne of knowing he has followed the money to some degree.

The record is well-produced, I will concede. It sounds big, it sounds impactful, but rarely do you actually feel that this is a band in any way. Even when James does reach for what initially seems to be a stripped back acoustic number in ‘Nevermind’, the strings, piano accompaniment and backing vocals are not far behind. It’s so incredibly frustrating, because the nucleus of a song that could be so much more personal is there. But I suspect the option of having this be a more minimalist track was a decision that was likely taken out of James’ hands. And the same thing happens (minus piano, but including drums) all over again for ‘Trying/Falling’. Less is more is clearly not an edict that Deaf Havana’s producers are enamoured with.

The remaining tracks see EDM beats, a feature from IDER(?), more synths, programmed drums and very little in the way of human involvement as far as I can make out. I take no pleasure in saying this, but I wish I hadn’t listened to this record. Apart from a few flashes of something I once loved, all this did was make me feel profoundly sad. When there is some discourse around the ‘resurgence of rock’ as a result of No.1 records over here for Architects, BMTH, Mogwai and even strong showings from Gojira and a few notable others, the reality is that the more sanitised likes of Royal Blood, Youmeatsix and Kings of Leon, (each of whom had No.1 records in 2021) does not represent a changing of the guard. If anything, it represents a disheartening reinforcement of the suggestion that all the public at large wants are bands who they heard of 20 years ago, with a few exceptions. The true tragedy of Deaf Havana is that they could have been something of their own. But ultimately, when the mainstream comes knocking, you make your choice. And you live with it.

In the end, this album is just boring. It’s had all the edges sanded off to such an extent that it’s basically a sphere. An inoffensive sphere that can be wheeled out (I know a wheel isn’t a sphere, but give me a break) to please the kind of people who enthusiastically proclaim that they “like a bit of everything!”, but actually mean they don’t have the ability to discern between what is good and what is bad; or simply can’t be bothered to try. I will not be listening to the next Deaf Havana album. I wish them well, but I sincerely wish they’d chosen a different path.