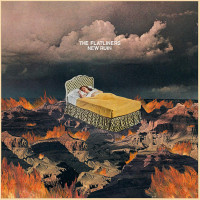 The Flatliners are back! Goddamn if it wasn’t something to look forward to for the last few months, knowing that when New Ruin dropped, there would even more tracks to comb through. Despite still seeming like a young band, compared to their cohorts in the punk scene, they have been churning out a gamut of anthems and rippers for twenty years. Hitting the mark and the road, respectively, while still in high school, those who have been following The Flatliners have watched them evolve over the past two decades, steadily refining their take on punk under the microscope of scene veterans and fans. Shedding their ska/punk style early on was probably the best move they could have done, allowing them to stretch out and take all sorts of pieces from the Venn diagram they started in, creating a wheelhouse all their own. New Ruin takes a minute to digest, but once it settles, there’s plenty to enjoy.

The album starts off with the absolute kick in the dick that is “Performative Hours”. If one was introducing the band to someone who has never heard them before, this is the track to play. Chris Cresswell’s vocals have never sounded more raw and fulfilling. From the gritty verses to the soaring choruses, he shines. Musically, the opening riff crushes and the rest of the track doesn’t relent. After this, though, the album starts to drift. Not in a bad way, mind you, but after 2017’s Inviting Light presented a “softer” side, for lack of a better word, fans were wondering where they would go next. New Ruin definitely takes a few notes from its predecessor, but amps it up. The riffs are well oiled and all the tracks snap, but the band has found more ways to allow the songs to breathe.

Most of the album is mid-tempo anthems, compared to the opening track, but the craftmanship to all of the songs is stellar. The sparse guitar with the backbeat during the verses in “Rat King” only make the chorus hit harder. “Top Left Door” starts off with Cresswell solo with an acoustic guitar, but the floor drops out into an almost 70’s-esque rock riff. “Tunnel Vision” gallops along and has some great guttural vocals harmonizing every so often. “Under A Dying Sun” sprawls out and sees the band ebb and flow together on a song that tops seven minutes. Picking apart each track here would be a disservice; with each repeated listen the album has grown on me because there are so many earworms hidden throughout and it was part of the fun.

Almost every song has a chorus that is built for screaming along to with the band during a live show. Cresswell’s lyrics have always been open to interpretation to some degree. He knows how to capture exactly what he wants to say with just the right amount of vagueness and cynicism. “Oath” gives a great duality with:

The howling screams of the word “love” during the chorus evokes a crowd with their hands up in the air, joining in for the call for something universally sought after and/or manipulated. “Big Strum” looks to burn bridges with lines such as:

Cresswell’s mentality seeps into the fabric of the songs, so even during slower numbers such as “It’ll Hurt”, “Souvenir”, and “Under A Dying Sun”, his lyrics have a weight that can be just as heavy as riffs from the bands’ thrashier tracks.

New Ruin is proof that The Flatliners are constantly growing. Having such a large back catalogue from two decades together and still only being in their mid-thirties, fans have gotten to see them consistently shirk off labels and expectations that some in the scene have tried to box them in to, with how stringent some punk fans can be. The band writes what they want to write with relentless dedication, making each album they have released hit in a different way; once you discover how New Ruin does, it’ll all make sense. They are still the same band you have known and loved for years, so just enjoy the ride.

Deaf Havana: The Present Is A Foreign Land