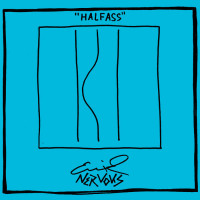 “New music by Halloween,” Erik Nervous posted on Instagram in October 2021. As far as I can tell, this is the music he was referring to, released on Bandcamp in April 2022. In keeping with the half-ass theme, I’m reviewing it in August 2022. The physical release is presumably still forthcoming. Why shouldn’t everything about a release called Halfass be done on punk time?

Despite the cavalier manner in which this EP was named and released (and reviewed), these songs actually feel more focused and aggressive than Erik’s Bugs!! album from 2020. Where that one sounded like a DIY punk project heavily influenced by Devo, this one sounds like Devo heard the Zero Boys in 1982 and decided to try their hand at hardcore punk.

While producing the Spits’ 2020 album VI might be the most high profile thing Erik has done, “Savages” (co-written with Spit Erin Wood) is the only song from Halfass that really reminds me of them from a songwriting perspective. It’s also the only one that clocks in over 90 seconds. The other 5 fly by, cramming in a full-ass albumsworth of hooks, stops and starts, guitar leads, vocal distortion, and a guest spot from Erik’s grandpa.

The download version has “ruff drafts” of a few songs as a bonus, and also a “coming soon” false start that is going to be an additional song when the physical release eventually comes out. Until then, these songs oughta be enough to keep the kids bouncing off the walls of basements all over the midwest.