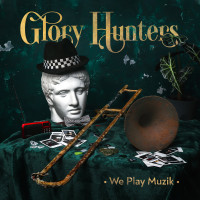 Whether you like it or not, ska, in all of its many facets, is making a comeback... Well, maybe not so much a comeback, since it didn’t really go anywhere, but there is a burgeoning and robust scene happening within the last few years that has put forth some noteworthy releases. One such band that should definitely get some praise is Glory Hunters from Moscow with their album We Play Muzik. Chock full of genre bending, great production, and musicianship, there is plenty to take from these ten tracks, even if you aren’t a fan of the genre.

General distaste for the third wave can be understandable; there are so many cringe inducing moments, but thankfully the new “wave” (or whatever this genre is measured in) has swept up what the last iteration left behind at low tide, giving newer artists a chance to bring something different to the table. What immediately jumps out is how good the album sounds. Everything is mixed together well, especially the three-piece horn section. A lot of times, horns can get muddled together, but the Glory Hunters’ brass section sounds crisp.

“Вступление (Introduction)” sets the tone for the rest of the tracks with a building tension that is repeated over and over throughout the album. Every song has so many turns and “suites” (for lack of a better term) that tie together a sinister tone that permeates We Play Muzik. With the lyrics being almost entirely in Russian, save for a few lines in “Muzik”, a non-native speaker can still feel the weight of the lyrics that vocalist/bassist Peter Bondarenko is bellowing, singing, screaming, etc. His vocal performance is top notch and adds just the extra amount of “oomph” on these already thick tracks.

Releasing an album with anti-fascist, anti-regime, etc. lyrics during Putin’s early invasion of Ukraine is a bold move, especially when communication with the outside world was cut for a time. The lyrics may not entirely address government issues per se, but the themes are dark. One political song is “Не наше дело (None Of Our Business)”:

“We were born free and pure
But unfortunately we were not prepared
That time would pass so fast
And we would hide behind the locked doors.

Our eyelids shake when one knocks on the door
And cold moves down the spine, from vertebra to vertebra.
We'll change all passwords, change all doorlocks
To become calm just for a while.

Chorus:
We'll put everything on the young
Our way is to close our eyes and keep silence.
We can barely see the sky from the abyss,
Feeling safe in our country of sorrow.

Living with fear together side by side, week by week
We are sure that it's too late to do something

We closed our eyes to extinguishing the flame of freedom.
Keeping our tongues behind the teeth, the teeth that we used to bite each other.

Everything in "Internets" is a lie.
We know better how to live.
The whole world is burning and decaying -
That's what the man from TV said

Why should we listen to the young?
We'd better listen to the howl of our wolf pack.
The world order is so simple...
Bring me back my 1937*”

*refers to popular ru-net emo-core meme "bring me back my 2007" and also to the year of the most severe Stalin's repressions.

A few tracks were translated by Peter and sent via Pookout! Records. Just from this one song, a sense of hopelessness can be felt. The mood isn’t always so bleak, though. “Спортивная (Hard to Play)” provides a more uplifting message, despite adversity:

“Every day give to the world a part of you and don't regret anything.
Burn and don't go out, don't waste time on empty talk.
Think of the things that don't let you be the top player and makes you sit on the bench.
And let other's problems drown their creators.

Do you leave everything to chance
And just watch things going their way?
Or do you pull yourself together and prepare for new experience.
'Cause if you try your best success is guaranteed.

It's up to you to decide which side do you take,
You're the one to choose your own way.
Self-confidence will double your strength
Never rely on other's help.

You're the one to choose!

Every day give to the world a part of you and don't regret anything.
Burn and don't go out, take a loan from time.
Try to be better than you were yesterday.

Don't expect something from what you didn't do.
You can't avoid the consequences of idleness.
And ship with a blind captain
Would crash on rocks that he is unaware of.
You can't reach the land on it's wrecks
Indifference gonna drag you down.
Sure, it's much easier to live like that,
Like millions of people do, but they won't be remembered.

Finish your work, burn the bridges,
Warm yourself near campfire.
Melt the ice of obsessive thoughts
And sort out everything in a moment.
The wave bears you through the rocks of lies
You try to hang on to them
But they are wet and slippery
And you fall down.

And that's how it goes, day by day, again and again.
You decide what to do and how to live.
Be ready for any life twists,
'Cause there are no victories without losses.”

The music itself is a furthering of the ska-core genre with heavy doses of skate punk and hardcore mixed in. If you are familiar with such bands as The Flaming Tsunamis, Folly, Skarp, and Sekta Core, then you’ll greatly enjoy We Play Muzik. For those of you who wince at anything checkerboard related, you may be swayed with the mix of A Wilhelm Scream, Rocket From The Crypt, NOFX and slight dashes of CKY and Mr. Bungle. Guest vocals from Grizzly Knows No Remorse on “Лицемер (Hypocrite)” definitely gives off a Mike Patton vibe, which is a plus. Most of the songs breach the four-minute mark, but there are so many moving parts that the run time doesn’t matter. Some even feel like a few songs expertly weaved together. The shortest song “Muzik” gives a thrashing sampling of what most of the album is like, so if you’re looking for just a taste to see if you’ll enjoy it, give it a listen.

Overall, it’s a great release with plenty to dig through. Ska fans may be turned off by how heavy the album is, whereas punk/hardcore fans may be wary of a horn section, but both fanbases would be missing out if they decided to skip this. Set aside your musical prejudices and experience a new milestone in the blending of genres.

Peter Hook and The Light: Live in Toronto