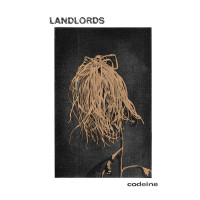 I’ve had something of a rekindled love affair with alt rock/shoegaze over the last few years. I’ve always been partial, and it provides a pleasant counterpoint to the freneticism of most of the other music I listen to. But I do find myself sticking relatively rigidly to a small group of bands as it stands. It might just be because I’m not so entrenched in the scene as I am with the more extreme genres, but there doesn’t seem to be a constant conveyor belt of new bands in the same way as death metal or black metal, for example. So I was happy to receive the upcoming EP (and follow-up to their self-released debut EP) from Landlords. A band who had drifted onto my radar, but I had not yet spent any time with. The band came into being in 2017, made up of members of hardcore, punk and metal bands in their native New Zealand. Their self-titled debut EP came along in 2020 and there has been a small buzz developing around them since then.

Codeine is 5 tracks and around 20 minutes, so a pretty good length for an EP, yet there are shoegaze bands out there for whom 5 tracks in 20 minutes would be a difficult ask, such is the inclination towards ponderous composition sometimes inherent in the music’s style. And in truth, Landlords certainly favour a slower pace, but crucially, they’re not ones for staying in the same place for too long. Yes, the sonics mean there is a consistent feel to the songs throughout most of their runtime, but small flourishes and deviations abound, so repeat listens bear great rewards. Also, as louche and flowing as the band’s sound is for much of the time, they can also deliver real weight; and do so to great effect in the final passage of “Clover”, occasionally in “Violence” and various other points. The heaviness always stops short of abrasive, but the guitar tone does unquestionably needle at you, just on the cusp of having something akin to crunch in it. I’d also like to draw attention to the gently soporific vocal approach their vocalist employs. Relatively consistent in its delivery, it relies more on contrast with the musical canvas it adorns to generate a specific atmosphere and yet it works wonderfully. Melancholy, tension, relief and more are all clearly discernible. It’s a neat trick.

In the end, this is a very promising release from a band who have what appears to be a natural knack for making this music. It ticks the boxes of dreamy soundscapes, twinkling alt-rock guitars, distorted washes of guitar and passages of surging momentum. What will be crucial, will be seeing how the band approach a full-length. This feels like a good mission statement but I’m hoping to see more in terms of experimentation when the album comes along. But fans of Hum, Turnover (Peripheral Vision-era), Nothing and bands of that ilk will doubtless find a lot to enjoy in here.