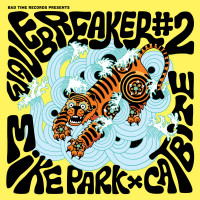 The student meets the master… but which is which? The second entry in Bad Time Records Wavebreaker series finds perennial punker and modern ska champ Mike Park facing off against lightning-in-a-bottle, newbie two-tone jumpers Catbite. As with many of the best splits, there is an understated theme that connects the artists here and, even better, instead of the energy being a one-way affair, both bands seem to jolt the other into action.

Park opens the release with one his strongest tracks ever releases. Vibing off his own ska pedigree as well as the Slackers/early Hellcat sound, Park and Karina Denike crank pout a slow burning, midnight scorcher. It’s equal parts rocksteady and soul and Pike leans towards that famous Sam Cooke vocal style where the voice is sweet, but cracks apart at the edges. Both singers are firmly in control of the material and they pay tribute to the legendary era of soul and soul-reggae by emulating it pretty much perfectly. “Lose with me” is more representative of modern Mike ska. It’s a high energy popper while Mike puts a sort of power-pop sweetness over the top. And of course, he contrasts the bright sound with dark lyrics: “Lose with me/ I could play the promises but they are broken just like me.” Park is often portrayed as this unrelenting positive figure that puts out music “for the right reasons.” (which he does). But for me, I’m more interested when we see the human side of Mike as opposed to the iconic side which is why this second track is not only honest and revealing, but willingly displays a problem or weakness in Mike’s life so that maybe we can all learn or engage with such an aspect of ourselves. This is high art.

Catbite, hot off their stellar second LP, start their side with a brand new song that is a Park composition. It’s interesting to hear how Park specifically wrote for Catbite and how Catbite Catbite’d up the track. While the base here is AMR high energy ska, there is a sort of ‘90s pop-punk layered over the top so that the tune has vocal melody reminiscent of Tsunami bomb, No Doubt, and yes, Dancehall Crashers. Again, we see a negative worldview permeate the lyrics. Ska is often characterized as happy music, so it’s a thrill to hear it be using for evil purposes.

“Everybody Talks” is a heavy-duty re-work of the Neon Trees hit. The track is pushed into a combo rocksteady/ska jumper with a little bit of Motown swinging thrown in for good measure. Catbite finds the fundamental melody and frankly, gives it a little more snap and edge than the original. I’m not a fan of much modern radio rock as it all sort of sounds kind of bland to me. Catbite proves that this might be due to modern studio and production because they took what I thought was a kind of meh song and make it a real firecracker.

The best splits are ones with a purpose. Here, Park and Catbite find a connection between the spindle and make two sides where each side toasts, learns, and empowers the other. In fact, I’d say it’s more of a joining than a split to begin with.