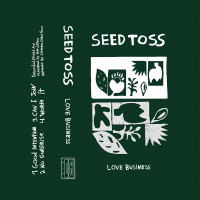 Released in June of this year with a total of 4 tracks clocking in under 10 minutes, this release pays tribute to indie/alternative rock icons such as Weezer and Jawbreaker as well as relative newcomers including Rozwell Kid and arguably the currently defunct LVL UP.

Starting off the E.P. the track 'Good Intentions' reminds listeners perhaps of one of the many hits of Weezer, notably Perfect Situation; with the explosive drum hits that take you back to maybe simpler times of 2005-2006, the hey-days of Mainstream Emo when spiky belts and scene kid hair was all the rage back then, but I digress. Make no mistake, these guys are beyond that by many miles, as their bio describes them as having a desire to play non-complex music and bringing it back to play sugar-coated fun songs, fitting for any punk/indie band these days.

Continuing on with the release, the second-longest track 'Can I Join' could be their top hit clocking in with a short but sweet 2:34 duration and the vocals are what really give this song the energy and vibe that could fit well with any Rozwell Kid release. The production value really hits it's stride on this track with the perfect blend of the bass guitar with drums that kick things into high gear, despite the relatively quick length of the entire E.P.

Other remaining tracks, 'No Surprise' and 'Worth It' definitely live it to their names as it's no surprise at all that they continue the Indie/Garage rock experience along with the aforementioned tracks. The chuggy, distorted guitars aim to bring a relaxed, feel-good vibe that's great for playing almost anywhere you go – super easy-listening, yet thoughtful enough with the lyrics to make you want to sing along at times when you don't even realize it, kind of like most Weezer songs if you really think about it.

While no particular moment stands out above the rest, the production is top-notch from start to finish - all recorded, mixed and mastered by Max Lajoie in Montreal, which seems like a great fit for the guys and for which they have found the perfect formula into translating the sound that they were originally aiming for.

Overall, Seed Toss' sound seems to flow into a safe, well-trodden path of sound but who's to say that's necessarily a bad thing? The indie/punk feel of every track makes for a fun listen while not overthinking about it, as the band seems to make that clear many times – which I believe they've achieved it with this particular release and kudos to them on that.

While it may be too early to start thinking about their next release, who knows if they decide to continue on with a similar sound for the next one or try some new formula to keep things fresh but hey, whatever happens, Love Business is definitely 'Worth It' to listen to by a long shot.