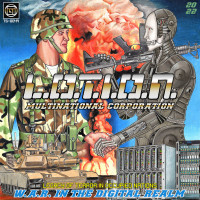 L.o.t.i.o.n. revel in the wonders of modern technology as much as they recoil from them. If there’s a more apt metaphor for living in the 2020s, I haven’t seen it.

The band’s third LP, W.A.R. in the Digital Realm has a cover that suggests Terminator 2 style future combat, but more than anything else, the album seems to focus on the war on ourselves, or really, the cold war created by corporations and governmental entities who are getting more and more savvy with digital footprint tracking and manipulation. When singer Alexander Heir calls out “Cybernetic super soldier” on the track of the same name, is he just talking about a fun sci-warrior robot, or is he really talking about how computer programs – everything from Tik tok to Instagram to Walmart shopping to social security- track us and manipulate that information to put the corporations in greater profit? It’s no coincidence that we have more conveniences than ever, but somehow a lot of us seem to have less time than ever… funny that?

It’s also interesting that the anarcho-punk/crust punk leaning L.o.t.i.o.n. do embrace computer and synth technology so wholeheartedly. Usually, crusties argue against modern convenience. How many punk move off to some farm and try to live off the grid? Penny Rimbaud even uses a non-flushing compost toilet. There’s even at least one crust punk song arguing against modern irrigation.

L.o.t.i.o.n seems not so severe in that sense. One of the album’s strongest tracks, “Every last one” is driven by a pounding compu-beat and a really rad distorted wash. Of course, the lyrical content is as punk as it gets. It’s a song about decapitation and the t title is “every last one.” You can do the math without any further detail. L.o.t.i.o.n. clearly argues that the current capitalist system is broken, is beyond repair, and is headed to full-on fascism. But, a lot of these tides are supported by rapid info exchange and tracking as made possible by the modern processor and A.I. so, does L.o.t.i.o.n. argue that these tools can be used responsibly?

Notably, while the band usually crams every square inch of their record with noise, W.a.r. is more spartan in its attack. A lot of the songs here comprise of only four parts- a drum machine, crust guitar distortion, Heir’s growl, and an industrial beat. In boiling down their sound, the band has given each step maximum punch. I like when the band is so noisy you can’t tell what’s going on but I also like when they are fully in control of just a few potent weapons. Tellingly, the band is also evolving. "Cybernetic Super Lover," the counter-punch to "Cybernetic Super Soldier" finds Lulu of Fairytale dropping Siouxsie Sioux style vocals over a catchy dance beat. It's a thrilling coda for the album, which revels in harshness, only for Lulu to come along and provide the "love" antidote to so much war, all in a gossamer vibe. L.o.t.i.o.n.'s counter-punch to modern horror isn't a counterpunch at all, but an embrace.

Of course, the irony(?) is that despite the dour nature of the theme here, and the catchy-but-abrasive music, the band is having a lot of fun. You can’t embrace, warp, subvert, and combine so much retro-military imagery with Japanese hardcore and dance music like this if you’re not having fun. That’s what makes this release so effect. I’ve said it before and I’ll say it again. A good party will influence people’s way of thinking far more easily than a dry political screed. L.o.t.i.o.n. have made their warning really fun here, but it’s a dire warning none-the-less.