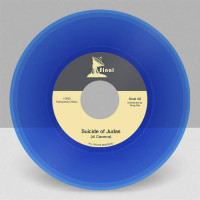 I’m sad that Sleep seems to be somewhat on pause and I’m a little annoyed that OM seems to take forever between albums these days, but it is nice that even though bassist Al Cisneros isn’t pushing his two main projects, he’s remaining active with his solo work. “Suicide of Judas” follows the trail of his previous solo cuts and is mostly comprised of Cisneros dropping his ethereal bass over a lumbering drum smash.

While Cisneros often brands these releases as “dub,” it’s usually meant in the recording technique description, as opposed to the Jamaican reggae genre. But here, more then ever, Cisneros DOES reference the massive grandeur and bounce of ‘70s roots reggae. His bass probably could be slipped onto an Abyssinians record and horns of Jericho blare in the background. On his solo cuts, he rarely, if ever sings, and both sides here are instrumental where Cisneros lets his bass and your brain do the talking. I do love when Cisneros sings in OM, but I DO NOT want him to sing against a reggae beat- it would seem awkward.

So here, the approach is tasteful and arguably somewhat restrained. As Lee Perry, Scientist, and King Tubby have shown countless times, dub can be a platform for going waaaaay out. Cisneros keeps a tighter reign. Even in the flipside, “Akeldama,” the dub-dub cut of the dub a-side, there isn’t much that would blow your mind technique wise. Really, the b-side is more like a discomix continuation of the a-side than a version or dub.

As before, Cisneros creates a hypnotic platter that is more ambiance and feeling than song composition. That’s just fine. There are several forces working in Sleep and a couple in Om, so it is interesting to hear just one of those forces extracted and amplified on Cisneros solo tracks. I also like how makes explicit biblical references on his tunes… even when they are instrumental? Does he feel no words could do justice to the concept of “Suicide of Judas,” or does he feel like a cosmic line can connect his mind to yours and words would get in the way? Is it just a fun title?

We don’t know and that’s why, despite the fact that the songs here are somewhat straightforward, Cisneros is more a puzzle than ever.