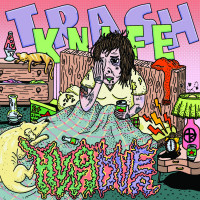 On Trash Knife’s new flexi-single, singer Lauren howls, “I’m down to fuck… fuck shit up!” Later she hisses, “I came to destroy.” It’s a loud, fast, riotous single. It exemplifies the two things that Trash Knife does really, really well.

First, at first glance, the band sounds like a party-punk/nihilistic band that just want to blitz their brains. But then, if you really dig into the lyrics, there’s commentary on modern capitalistic society… and just giving jerks their comeuppance. I also love how Lauren sneers on the second track, “You’re SOOOO fucking COOOOL,” There’s an anger here, but there’s humor in the anger that makes you side with the band right away.

Second, the other thing they do really, really well is ROCK. Guitarist Steve rips out licks that echo the early LA punk scene, but he also adds a chaotic spinning onto the lines. It sounds like these tunes might break apart at any second. There’s some melody and a lot of noise and that’s the way to play it.

Trash Knife have levels, but the fan part is you can just hang around in one if you like. Want kicking punk? Just ride the riffs. What a detail of mental anguish of living in 2022? Read the lyrics and, more importantly, read between the lines. Here is a band ready to kick out a KILLER, multifaceted LP. So, um, WHERE IS IT?????