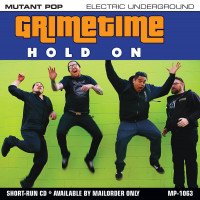 Mutant Pop continues it's mission of bringing the pop-punk bubble new bands through the release of their short-run CD series.  This time, Mutant Pop brings us the newish band Grimetime who hail from Ukiah, CA.  I had first heard of these guys through discussions in various social media groups following their original demo. Needless to say, I was extremely curious to hear they were working with the classic label.  For those who don't know, Grimetime pay serious homage to the classic 90's American pop-punk style.  To boot, veteran pop-punk engineer Mass Giorgini mastered this release at his famed Sonic Iguana studio.

"Alison" serves as the leading track in this 7 song release. Though from California, I hear strong Midwest pop-punk influences on this track. This mid-tempo rocker is not unlike bands such as Winepress. Strong backing vocals help carry this track which features strong but subtle guitar leads. Grimetime takes a more "four on the floor" heavier punk approach on "I Don't Wanna Be Lonely" which follows. The whole band kicks right into this track which rarely slows down. This song is about making changes in your life for the better. The track also boasts a solid bass line break in the bridge. "Into The Bathroom" begins with a classic Screeching Weasel style intro lead that has defined the genre. This is your typical mid-tempo Lookout Records style pop-punk track. This is complete with a catchy lead and solid backups in the chorus. The darker and heavier "Human Show" takes this release in a completely different direction. Strong later-era Lillingtons vibes are present on this song. Vocalist Brian Klovski showcases his unique range as he states "I don't wanna go to the human show" throughout. "My Head Is Empty" begins with a killer intro complete with a metallic guitar lead. This approach helps break up any monotony of styles on the release. This track features many tempo changes and vocal ranges. The strong verse features a call and response vocal pattern to keep things interesting. Grimetime take on an almost garage punk approach on "God Damn Draculas." This raging track is delivered with a more aggressive vocal style compared to the other tracks. The title track "Hold On" concludes this set of tracks from this Ukiah, CA band. The song starts acoustically with gang vocals to accompany the rhythm. This super catchy closer plays like a nursery rhyme.

If you miss the days of solid mid-tempo pop-punk, then look no further. Grimetime is a band that should be on your radar. They encompass all the best elements of 90s Lookout Records mixed with other bands such as Weston or Zoinks. I am looking forward to hearing additional recordings from this band. Grimetime are not reinventing pop-punk, but they definitely serve as comfort food which will keep you warm on a chilly night!

Counterparts: A Eulogy For Those Still Here