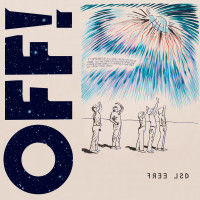 Now, to be fair, OFF! Mark 2 isn’t necessarily a slap at OFF! Mark 1. We have to acknowledge that the origins for Free LSD came from OFF! Mark 1’s aborted Watermelon project. But, that being said, it sure does sound like Morris and guitarist Dimitri Coats are REALLY trying to prove something on the band’s new release.

Free LSD, the group’s fourth LP (basically) finds OFF! At a critical juncture. One, after the wham-bam-slam, attack of the first three albums, pretty much everyone inside the band and out decided it was time for the band to do something new. Second, Autry Fulbright and Justin Brown are the band’s new rhythm section following the departure of founding members Steven Mcdonald and Mario Rubalcaba.

Well, the gang came to destroy. Free LSD is the band’s most frantic release to date. In previous incarnations, the band would establish a theme and drive the anil home in a 60 second swipe. Here, the songs are filled with dynamic twists and turns. Coats might start up a riff only to veer off in another direction in second 43, never to return to the initial theme. Morris, who established the group on real-life concrete stories about his life (“Jeffrey Lee Pierce”; “Mr. Useless”) is now looking to the skies and occult books, telling us tales about cryptids, governmental conspiracies, and sci-fi concepts. The band has made it a point to do what they previously did not. It was time and it was the right move.

The bulk of the album, which also serves as a soundtrack to an upcoming movie, was taken from the material in Morris’ podcast, Blowmind. The program finds Morris and Pete Weiss (Thelonious Monster) considering the believability and probability of conspiracy theories in a mostly scientific approach. Those conversations are bent and warped here into a future-chaotic vision.

“Time will Come” finds Coats crashing and bombing his guitar while Morris howls about aliens. Also, a squeaking theremin-type thing blasts away in the back sounding like a dentist drill and radio breakdown. This is the most savage and chaotic OFF! Has ever been. (I also like Sabbath-ish riffage on "ignored"). It keeps the band fresh and the album exciting. As much as I loved the call backs to “Nervous Breakdown,” that mountain has been climbed and the band is now leaping upwards into the stars.

Fulbright and Brown aid in this mania. Neither of them have punk backgrounds. They supply, maybe not a jazz influence, but a looser, more shifting style so it feels like the album is constantly sliding about, crashing into itself, and existing in a whirlwind. The simple strike riffs are still prevalent here, but a coat a chaos and trash get caught up in the barbed strike. And yes, the band does engage in experimental sounds here and there- a little synthesizer whirl here, a little feedback drench there, maybe some noise tracking over there. It keeps the band fresh and weird, but truth be told, at the band’s core, it’s still OFF! It’s still the boys blasting out riffs. It’s still Keith howling over the top with his iconic, pinched/growl voice. It’s the Bowie approach, really, and It’s still OFF! and if these slight diversions are too much for you, maybe you never really got “it” in the first place…

All that being said, Free LSD is the band’s most albumy-album. Instead of repeating ideas and sounds like most of pop/rock, the album jumps from one idea (sonically and lyrically) to the next, requiring an engaged listener. Whereas previous OFF! Albums reveled in spartan attack, this one is purposefully big and messy. That gives it a number of levels and it also makes it fun to dig through the layers here.

The fact is, even if the release was born out of self-implosion, and even if the concepts here are pretty dark (governmental mind control, for instance), it sounds like the gang is having a lot of fun trying something new and, instead of adhering to self-imposed limits, saying there are no limits. The band has freed themselves and, in doing so, have rejuvenated themselves and created something new and daring.

Free LSD is built off a basis of conspiracies THEORIES, but the album itself is PROOF that chaos and anger and conflict and an open mind and fun is what gives Morris his strength, creativity, and singularity.

Suzi Moon: Dumb and In Luv