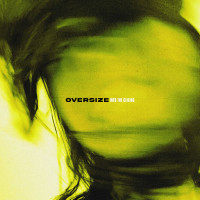 Oversize are a band who haven’t been around for too long. I don’t know if that would be discernible when pressing play on this EP, though. Not only do they come across as very proficient songwriters and have a sound that is as comfortable as a busted-up pair of old slippers, but it’s also very familiar. This is simultaneously the best and worst thing about this EP. Let me explain.

As I say, the sound is familiar and comfortable. Not least of all because there is a very liberal dose of Basement in Oversize’s take on slacker, shoegaze, alt-rock. It’s also reminiscent of Dinosaur Jr to a lesser extent (and with less flamboyance than Jay and co typically bring, I should point out) and a few other bands. Don’t get me wrong, they do the big washes of guitar thing very well indeed. There are moments where I think they sound fantastic; the mood propulsive, the melodies organic. But that organic nature does lend itself maybe more towards comfort than exhilaration. It is also difficult to argue, given the similarity, that the vocal is as identifiable as Andrew Fisher’s.

I’m probably being overly harsh here, because I really like this collection of four songs and given that they weigh in at less than fifteen minutes total, then I can’t in all good conscience, criticise Oversize for playing a succinct collection of songs I’d very happily watch in a club show or Outbreak/TIH festival alike (they did actually play at Outbreak earlier this year incidentally) but I’m hoping that when the time comes for the debut full-length to drop that they stretch themselves somewhat, compositionally speaking. And not because it’s essential to this (or indeed, their) sound per se, but because there is enough promise here for something really quite exciting. If you just love that Basement/Fiddlehead sound (and most people reading these will be at least open to it), then this is 100% for you. But without wanting to sound like a judge on some shitty talent show, there is arguably some work to be done in finding their own voice. If they do though, these guys could be a lot of people’s next favourite band.

Suzi Moon: Dumb and In Luv