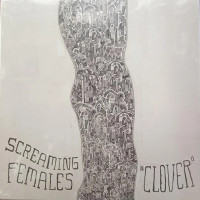 Curious that Screaming Females have chosen to make their new EP semi-secret (you can only buy it at their shows), because it features the band sounding EXCEPTIONAL. The group’s earliest stuff found them shredding it up at 200mph, and the more recent stuff has found them making precise, dedicated strikes, but here, the band is reveling in what’s underneath the surface. Again, simplicity is the rule here, but underneath that simplicity is a dig site of SOUUNNND. What I am saying is that whereas before the band perfected playing notes, now they have perfected generating sound. I’m not sure why I am getting so hung up on how good the band actually SOUNDS (which I suppose is the point of music), but the band has found a way to make fifteen colors pop out of a single brush stroke from one paint dip. It’s almost as if finger technique is too easy for the band, so they are seeing if they can pull multiple sounds from one pluck or crack. If this EP was a wine, some douche in a turtleneck and blazer would say something like, “A assured but delicate ballet of oak and north field cherry, with an understated licorice highlights that are daringly cloaked by a earthy and playful ambiance.” Today, I am that douche.

“Swallow the world” opens with a drum power-strike by Jarrett D before bassist Mike A and Marissa Paternoster lock into a short solo that is like Sticky Fingers era Stones decided to be in Hawkwind. It’s spacey and blusey and I love it. The band takes this spartan, but bold approach throughout the whole album. Sort of the deliberate, slow-mo punch of “Glass House” from their last LP, All At Once, the band has a clear vision of attack. They know that, perhaps paradoxically, keeping it slower and rumbling here let’s us really get what is going on. Instead of rushing through theatrics, we get to focus on each individual scene- almost to the point where the band feels gothy at points. (Listen to the Sister of Mercy style outro on"Violence and Anger.") This is a very good thing.

As usually, Paternoster slides surrealist, gothic imagery into her storytelling. “Where I live,” mentions “blood” and “love,” some of her most favorite trademark topics, along with being abandoned. My guess is that Paternoster often cloaks her lyrics in such Poe/Mary Shelley varnish because these tunes are exceptionally personally, so the added mystery creates the feeling intended without any details. It’s a good trick that also lets you bend the imagery to your own personal vision. From "You Got It:"I thought it would stop / I watched You leave / I Swallowed Your Coil in Ecstasy / Now you got it!" WTF? I feel totally gothed out. Someone tell David J to buy these lyrics. Don’t ask me what “My Dead Wife” is about. It’s a creepy title for an alarmingly upbeat tune that has the lyric "I wish that I was dead" that feels like bad mojo to even discuss. Let that one do its own talking.

I felt that in its massive vision and pure execution, All at Once was the band’s epitome. But, before that, I thought the all out rockage of Rose Mountain was the band’s epitome, so I was wrong there. If the band cuts an album as spacey and as bold and as artfully direct and nuanced as this EP, I’ll be wrong again. I’m willing ti bet that I’m right that I’m going to be wrong, FYI.

Oversize: Into The Ceiling (EP)