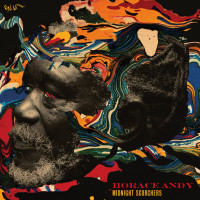 Midnight Rockers, released earlier this year, was a massive strike for reggae veteran Horace Andy. The Adrian Sherwood/On-U produced track both updated Andy and presented his classic strengths, resulting in one of his best ever albums. So, why not keep the party going?

Midnight Scorchers is the companion release. It’s not exactly a dub version, since most tracks aren’t true dubs, and it’s not really a remix album since most of the original tracks are used to build something entirely new, or, they actually ARE dub cuts. So, if you have to classify it, it’s something more similar to Lee Perry’s iconic Super Ape in that it’s a collection of tracks built from other songs.

The reason I bring this up is because, as with Super Ape, everything stands on its own here- the tunes aren’t dependent on their ancestors. Rather, tracks like “Come After Midnight” takes the initial version of the song and drive it off in another, self-supporting, direction. The groove is the focus here with a song’s core melody or riddim being brought into the forefront. The absolutely KILLER “safe from Harm” is now “Midnight Scorcher” and Mc Daddy Freddy, a somewhat underappreciate 80s dee jay that is reminiscent of Prince Far-I, chops it up with some a-plus toasting while Andy himself supplies the refrain.

It’s also a thrill to hear tracks like “Sleepy’s Nightcap” deconstructed and then built back up into an experimental sound journey. Whereas most dub tracks place emphasis on pre-exisitng parts, here the track is broken down and built back up into something new. ‘ Another massive highlight is when Studio One titan Lone Ranger storms in on “Dub Guidance.” He’s in top form, as is Andy and the band, which includes Style Scott and Skip Alexander.

Often, “companion albums” are pale imitations of the initial cut, or they feel like they’re done more out of a sense of obligation, or to just milk the fans. That is NOT the case here. Midnight Scorchers is one of the rare LPs that takes the lightning out of the bottle, blasts it around the room, and then puts it back in another bottle.