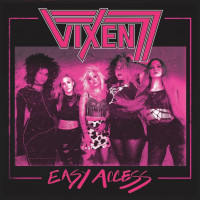 Vixen77 rocks. But, there’s more to it than that. Maybe what’s most interesting about the band’s debut LP, Easy access (a vague Alice Cooper reference?), is how they re-contextualize ‘70s punk and ‘80s hard rock into a modern platform.

As before the band takes a ’77 punk charge, but now, more so than on the earlier singles, is that the band adds a bit more low end crunch and thunder, referencing Joan Jett, Lita Ford, and maybe even the Scorpions. There’s a lot of riffage here and the band kicks out some real thumbnsappers. But, unlike some of the ‘80s leather jacket/leather pants type, the band is wise enough to keep the tunes short and too the point. The end result is tunes with the power of rock/metal crossover, but the tuneful ear and self0ediitng of the first wave punk classics. Listen to the glammy hop on “Record Store.” The bass and guitar lock together in a perfect swinging force.

But then, there’s the twist. In between headbang crunch, the slides in come decidedly more modern commentary. “Some Days” discusses mental health in a modern context. “Evade,” which is one of the real hard hitters, starts with an almost grunge opening before calling out “Do you want to change me?... I’m going to leave you.” At once it’s a statement of vulnerability sand independence. That’s a hard notion to describe, particularly in a verse-chorus-verse-chorus structure, but the band spits the eye of the needle and sends the thread right on through. “Own Me” is a bit more bloodthirtsty, and I like it.

Really, Easy access is an impressive collage. They pull from punk and metal, and stitch it together. They draw from a “let’s party oh yeah” aesthetic, but then bolt in socio and even progressive political positions. On its face, the record is a straightforward rocket, but between the riffs, are valleys of nuance. As with most collages, the sum is much more than the parts and the collage is pasted together so well it looks like a singular piece of work. This record is straightforward and twisty-turney at the same time. And, it rocks, man. It totally rocks.