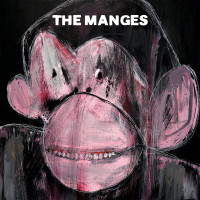 The term "pop punk" means a lot of different things to different people. I am not here to debate what is or is not pop punk. In the 1990s, many bands arose in the United States who ultimately gave birth to what is commonly known as Ramonescore. At the tail end of the 90s and beyond, the sound that was sweeping the nation made it overseas. The European pop punks caught the bug and a whole new crop of bands appeared almost out of nowhere overnight. Two of the forerunners of the Euro pop punk bubble are DeeCRACKS from Austria and The Manges from Italy. Both bands no doubt have been the subject of many news stories and reviews on this site within the past two decades. Mom's Basement Records from the States has teams up with Italy's Striped Music to bring the masses this highly anticipated split release amongst these two Ramonescore heavyweights.

The two DeeCRACKS tracks make up the A Side to this split 7". The mid-paced "Do What You Must" is the lead off track. The verse commences with strong palm muting to help accentuate the vocals of guitarist/vocalist Matt Dee Cracks. Like many Ramones classics, this song is complete with many quick chord changes between the verse and chorus. This helps any short but sweet pop punk gem from becoming too monotonous for the listener. Building such a song structure is something which DeeCRACKS has excelled in over the years.  The band picks up the pace on "The Point Of Being Here" which follows next. In just under two minutes, the band takes us through more quick chord changes. Also worth mentioning is the ability to alter the vocal range throughout the song. At under four minutes, the DeeCRACKS side is over before you sat down from dropping the needle!

The Manges showcase their veteran status in the scene right off the bat on "World War Mentality" which leads off Side B. This song starts off very quick and strong. Andreas Manges perfects accentuating his vocal delivery in the chorus. The quick chord changes in the verse takes the listening on a pop punk roller coaster ride. This song also boasts subtle yet effective guitar leads in the right places.  "Libra" starts with some solid dual vocals to set the pace of this steady paced rocker. The vocals are mixed very well on this track with the powerful guitar downstrokes underneath. As a longtime fan, I can admit that I do not always understand the subject matter of the lyrics of every Manges track.  That being said, their catchiness helps the music translate any language barrier. These two tracks are no exception.

This short and sweet four song banger is a treat for the most discriminating pop punk fan. The brevity of the tracks certainly will appeal most to fans of Ramonescore over any other sub-genre of pop punk. Both DeeCRACKS and Manges can truly craft a brilliant song in two minutes or less. I have always felt it is more difficult to capture the attention of the audience in two minutes than five or ten. This split release showcases what each of these modern pop punk heroes does best.  My one desire would be to squeeze in one more track from each band.  Beggars can't be choosers though, right?