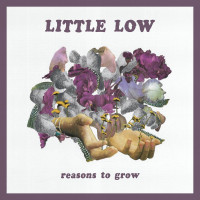 Over the summer I was scrolling through Instagram and saw a post advertising a gig in my San Francisco neighborhood which intrigued me as the venue is actually the local karaoke bar and doesn't exactly have a reputation for live music. I was further motivated by the thought of a punk show within walking distance of my apartment, and I’m glad I went out that night because I happened to stumble upon an absolute gem:Wiretap Records’ new ingénue of an emo band, Little Low.

I had originally only intended on staying for the band advertised on IG then dipping out to meet some friends who were weaving their way through a cluster of tiki bars midtown. The show’s venue, a Northern Ireland supporting pub called Ireland’s 32, is known to boast heavily adorned walls with dusty velvet portraits (including that of Shane MacGowan) showcasing Irish Republican Army historical heroes alongside the horizontal stripings of football scarves. It definitely seems more like an Oi Oi! sort of joint at first glance, but I digress because it ended up being the perfect container for a not so rowdy pop punk gig that particular evening. Usually packed with post-shift working class expats from the neighborhood, the creaky wooden stair-cased bar (it’s a little spooky inside, honestly) on the west side of town was just about at capacity, but this time cream-filled with all varieties of grown up hardcore, emo, and scene kids.

When you’ve lived in a city like San Francisco for eons like I have, it’s like you know everybody but nobody at the same time. It’s less like living in a bubble and more like existing within a snow globe of sorts, a very strange and somewhat delusional place to aspire to make a home or just live your life. With so many transient creatives filing in and out of the city in waves over the years, it’s easy to know every venue like the back of your hand but still arrive to a room full of strangers on any given night, as was the case for me at this event.

I have attended roughly 25,000 shows in my lifetime so instinct kicked in perfectly and I only had to wait about 10 minutes before the band I went to see got started. My anonymity served me well as a reviewer, plus there weren’t any friends or colleagues around to distract me (as was usually the case) so I grabbed a drink and slithered my way to a darkened area near the lip of the stage to watch Negative Progression Records’ new band get started.

Greyed Out was pretty good - a 5 piece of grown up hardcore kids from the East Bay doing melodic post hardcore with a poppy emo twist that make you think these guys probably all have mortgages but still rock just the same. When the bands changed over, however, I was intrigued by noticing both a teeny tiny punk rock girl and an individual who was visibly queer setting up, so I decided to text the girls I was running late and stuck around for the rest of the gig.

From the moment Little Low played their first few notes my hair almost flew back as if someone had suddenly turned a giant fan on in front of me. (Think: old Maxell tape commercials) Here was this pint sized lead singer, standing about 4’11” or 5’ tall max, playing a beautiful pistachio green Stratocaster and positively belting into the mic with a giant smile on her face. Immediately reminding me of an entirely new version of Paramore’s Hayley Williams, guitar player and vocalist Christine Atturio (Save Ends) is a charming front woman to watch with both a magnetic presence and a powerfully gifted vocal range. Her charismatic talent is the sort that makes one assume she most likely took the lead in her high school’s musical and if not, she probably could have if she wanted to.

And that particular sort of charisma translates perfectly to their new five song EP, Reasons To Grow out now on Wiretap Records. Vocally, Atturio is like a mixture of Williams, Michelle Branch, labelmate M.C. Cunningham of The Dreaded Laramie, and old Metric albums. In fact I would love to see her go back to Ireland’s 32 on one of their karaoke nights and smash “Dead Disco” or “That’s What You Get” but I digress because musically, however, Paramore they are not.

Wiretap is indeed right where the quartet belongs as they uphold the very specific West Coast melodic emo pop punk that has become the label’s namesake sound as of the recent past few years. If you’ve read this far, this is sort of an album review mixed with a live show review which is unusual for both me and Punk News (as I usually only pen one or the other) but the bonus perspective feedback I got from seeing this brand new band right before their brand new EP dropped was a real treat for me as a reviewer.

For example: The pounding drum styles of Mike Assatly (Spirits, BearTrap) plus recurring jun-juns of both guitarist Eric Pocock (Discourage), and bass player/vocalist Kris Moya (Long Knives, Jabber) are revelatory of their hardcore kid pasts. Atturio’s upbeat guitar solos and plucky, earnest crooning balances out what ends up being an astonishingly well produced and arranged five song EP. There is a very fresh yet powerful energy that permeates through their recorded music which translates unbelievably well live, with Atturio flexing her broad vocal range by hitting and nailing a number of difficult notes, Assatly’s intensely energetic, flailing, “Animal” (like the Muppet) style drumming, plenty of jumps, stomps, and scissor kicks from Pocock, and Moya’s groovy, Daddy- like vibe holding it all together stage right.

As for the EP itself, my best tip for listeners would be to resist the urge to skip around because most of the tracks take about a minute or so to really open up and get going. There is a very particular and complex way each song is arranged which I assume at least partially stems from the fact that Atturio started Little Low as a solo acoustic project back in 2020. The concept of the band’s name is well represented in their songwriting with overtones of courage, self reliance, perseverance, hard work and a general dedication to oneself; great signature themes for smol folx taking on a big world.

Although there has been a *spectacular* wave of femme core punk bands featuring young womxn at the helm lately, (Froggy, Vixen 77, Destroy Boys, Surf Bort, Slaughterhouse, Amyl And the Sniffers, etc) I’m reminded of an art print by my good friend Phillip of UK based punk illustration brand HE Creative that reads: “Just Being A Woman is One of The Punkest Things You Can Do”. If you pay attention to Atturio’s lyrical themes, however, they’re less about the messed up experiences of moving through the world in a femme body, and more about how she’s summoned the courage, grace, tenacity, and will to navigate it all on her own.

What really carries this EP is the intensity of drummer Assatly’s driving and pounding percussive style alongside the same sort of well timed and impactful breakdowns more commonly heard on hardcore albums. This not only offsets the sugary sweet vocals but also provides a great sense of duality; there’s something that’s just so nourishing about this band in a stick to your ribs kind of way. This is solid music with good bones by a band with a ton of potential who will, in my prediction, stand the test of time by how many copycat acts they’ll ultimately inspire in the years to come.

I’ve heard Little Low compared to Weezer before, and I guess that’s sort of right but such a general comparison (for/about any emo band really) and in this case especially. More specifically, if you’re into bands like The Carolyn, Sarcasm, Dazy, and Stand Still for their musicality, or the vocal stylings of Fresh, Sweet Pill, and Mo Troper then you’ll love Little Low. They've got a much brighter sound in comparison however, one that’s both heavier and fuzzier than the aforementioned groups. There’s also a certain sort of vintage lo-fi quality resonating throughout several of their songs which time warps me back to the early 2010s and the many long drives I took down the I-5 to LA, with my favorite Ravonette’s CD as the soundtrack.

Standouts include opening song “How Hard I’ve Worked” - a head bang-y jammer full of crashing drums and lyrics brimming with door slamming determination. The following track “Dream Dog” is for the aforementioned lo-fi lovers with a fuzz pop intro that broadens into a stage dive worthy showpiece sure to get any of their front rows bouncing with a quickness. Lead single “I Am Not” is one of many tracks that starts off slow then builds up to the driving, earnest intensity I’ve telescoped in on as this band’s signature sound. Much like the other songs, the lyrics have to do with determination and pushing through despite the odds, tying in the EP’s overall theme of one young woman’s perennial journey to be a better version of herself quite nicely. That being said, I can’t say enough how great it is to see this sort of protagonist with main character energy portrayed within this genre of music. The EP’s title Reasons To Grow is also derived from this track with growth being the keyword for LIttle Low, and with such a maturely actualized debut EP offering they’re unquestionably ones to watch out for in the coming year.

I’ll leave you all with the added prediction that Atturio could even evolve into the “next” Hayley Williams as she has the potential to become somewhat of a counterculture frontwoman pop idol similar to how the myriad of femme fronted post wave bands are positively enchanting the ska scene queer youth right now. There is something very relatable about her despite the intangibility of her talents, it’s like watching a punk show featuring a hardcore band but fronted by the top of the cheerleading pyramid - yet somehow it all just works. LIttle Low is on the cusp of becoming one of Wiretap Records’ biggest bands in 2023 with their infectiously permeating live shows sticking with you for months afterwards and their fresh new take on modern day California melodic emo pop punk encapsulating all the potential in the world to be not only successful, but also quite impactful.