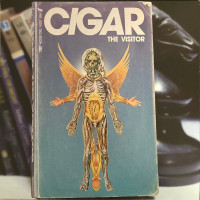 Apropos of their namesake, this release—like Jim Carrey as Stanley Ipkiss in and around 1994—is sssssmokin’.

And like the era that wrought The Mask, Cigar’s style of melodic skate-punk fits nicely in a mid-90s context; in this case, arousing both nostalgia and appreciation for a form that when done right (or very right, as it is here) is just as exciting as it was 25 years ago.

To suggest Cigar’s invocation of yesteryear’s style is somehow pastiche or tribute would be erroneous, though. They’re actually a product of said era’s heyday, forming in 1996 and signing in 1997 to Theologian Records, becoming labelmates with skate-punk mainstays like Pennywise, 98 Mute, and No Fun at All.

In a somewhat rare move, Fat Wreck Chords picked up the veteran act for the release of 2022's The Visitor, a tightly packaged series of melodic blasts that feels perfectly placed in its catalog. For reference frames, think a slightly more frantic Pulley. Maybe a less metallic Bigwig. But don’t think the Shins, even though the two bands share a drummer. What is it about the Shins and veteran punk rockers? First Scared of Chaka’s Dave Hernandez and now “Big Jon” Sortland.

No complaints, though. Sortland’s drumming is spectacular here. Pummeling in frenzied control, it works well with bassist Jonathan Hischke’s darting grooves and guitarist/vocalist Rami Krayem’s catchy but unconventional melodies. Whether on topics of skateboarding (“Legacy of the 7 Plies”) or more sober reflections on life (“We Used To”), the band doesn’t sacrifice efficiency for prowess or vice versa. Not every song is an absolute dime ("Forget About Me" doesn't get good until halfway through), but there's not a filler track of the ten heard here.

On The Visitor, Cigar puts the “power” in power trio, delivering a breakout(?) album that’s both aggressive and agreeable. Whether the soundtrack to a skate session or backyard barbecue, light this sucker up and enjoy.