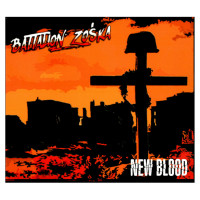 The BZ Boys are back with a second helping of neo-street punk. But whereas the Philly band leaned into hardcore here and there on their first LP, on their second slice, New Blood the band goes for the, dare I Say, operatic?

Opener “The Infection” has a soaring guitar that could be sliced out and dropped onto the climatic battle in an action movie. This cleaner, catchier styler is heard throughout the record. “Slipping Away” is charged by a bright gang chorus while singer Pat Society talks about facing off with society’s pressures. In fact, it’s so poppy that it could easily pass for a Slade track. (I’d say it sounds almost glam but that would certainly cause consternation among these lifelong street punk boys).

That being said, there is some classic hard punk smash-n-bash. “Kids,” which has guitar contributions from Black Flag’s Dez Cadena, is a bit more gritty and bombastic. “Warszawa” has a similar high rush charge. Still, even when the band is nasty, they’re still nice. That is, as with all good street punk, there’s actually song composition underneath the noise, and not just speed and noise.

In addition to the newfound embrace of the brighter sounds, what makes BZ’s second LP stand out is the somewhat scholarly approach to things, which isn’t often found in this genre. Singer Pat is a big history buff, especially in the area of 19th and 20th century Polish politics, and that’s weaved throughout the record. At times, he’s simply telling a history lesson and at others, he used the past to the describe the present and paint the future. The band speeds along pretty quickly, so you might have to go back and re-re-read the lyrics, but some of the concepts here could very well likely be found in a masters or doctoral thesis with regard to historical themes regarding mob mentality and political oppression.

Oh, and along those lines, a certain former present, quite sadly, fits squarely within that theme. But on top of that, the band is clear to point out that even though that one guy isn’t in office anymore, the battle is far from over… and if you don’t believe me, go read some books on Polish history.