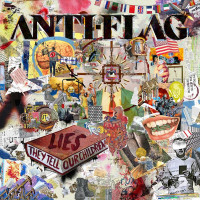 I'll start my admitting I have not checked out Anti-Flag in many years. I used to see them and listen to them all the time as a teenager and in college, roughly the time between A New Kind of Army and Underground Network and Mobilize-Terror State. This was the post 9/11, Iraq War years when they had alot to protest against. I guess I kind of checked out when they joined a major label, and this is the first new album of theirs I've checked out in a while. It helps I saw them at the Fest and they were a pretty kick ass headliner. They made a big deal of retiring Spaz's House Destruction Party, because they feel they've outgrown it and they see themselves as a serious political band now. I got to see its last live performance.

Lies They Tell Our Children is their latest. Spinefarm isn't a major label, as far as I know, so I guess they stopped that. The songs sound...kind of techno. There's a lot of latter day Rise Against/AFI style industrial distortions and effects. The choruses and vocals still sound like ye olde Anti-Flag, and the lyrics are still all social and political commentary. The songs are really catchy. Imperialism, Victory or Death and Modern Meta Medicine were my favorites.

So I guess Anti-Flag evolved from the street punk band I remember to a post hardcore-ish headliner. Most bands change as they go on. I don't think Spaz's House Destruction Party or Summer Squatter Go Home or Drink Drank Punk or Go Go Dancer deserve the death penalty though. I still kind of want to hear those live.

Ezra Furman: All of Us Flames