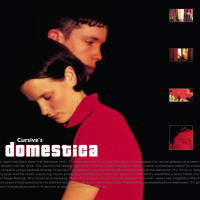 I was practically shaking when I bought this album, I was so excited. I'm just not a huge Cursive fan, but the circumstances this album was written made me sooooo excited!

For those of you who are not familiar with Cursive, it's sounds like The Cure's vocals with Christie Front Drive-esque dissonance, but with the crunch of Sweep The Leg Johnny. Tim Casher, one of the premeir song writes of our day (He rivals Conor Oberst), got married after the last Cursive release and Domestica was supposed to be the slow, soft, love soaked, just-got-married, kind of album for Cursive.

Well, he got divorced.

Not that I'm happy, but I'm not sure what Domestica would've been if it wasn't for the divorce. The guitar crunches hard, the cymbals splash harder, and the vocals are so pained, so heartfelt, you want to send him a get-well card.

The highlight tracks are "The Martyr," "The Casualty," "The Lament of Pretty Baby," and "The Radiator Hums." Most all the songs are good, these are just the standouts.

Domestica is definitely a mood album. It is not a driving-to-a-show-on-a-Friday-night album. It's a I'm-so-lonely-my-heart-is-so-ugly-I-hate-myself-you-did-this-to-me kind of album. If you buy this album with a good mood, it will leave a bad taste in your mouth. However, if your in a despondent, existentialist mood, buy the album now.

For those looking for a ground breaking indie album, this isn't it. It's good, it's solid, but it's no "Relationship of Command." Saddle-Creek puts out good stuff, but they will never breed a scene changing record. Some stuff is not listner friendly enough, and sometimes it just never gets enough attention to go past that.

MxPx: The Ever Passing Moment