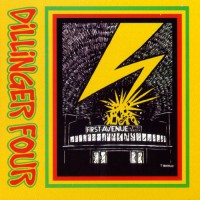 In 7th grade, I remember kids proclaiming "The Mark, Tom And Travis" Show as the best live album ever, they cited Blink 182's middle school humor and "edgy" choice of language as the reasons. However if I could travel back in time, I would beat the shit out of them and hand them "Dillinger Four: Live?".

You see, the story goes that Bad Brains cancelled, leaving D4 to play a full club. Oddly enough, the album starts with Patrick playing the message that H.R. left on the club's machine. After a few funny jokes from the guys, they run right through "Our Science is tight". More jokes and Spinal Tap references are made and they play a plethora of songs off "Midwestern Songs for the Americas" and "Vs. God". The album seems to translate all of the fun of going to a D4 show, portraying the humor and drunken stabs at playing songs. One problem I have is everyone but Paddy's vocals, while his vocals are dominant, loud and clear, the rest of the band's vocals just seem weak.

Throughout the CD, they call H.R. (who doesnt pick up), The drummer from Boston and Fat Mike. (By the way, they give out H.R.'s number on here, they block out the area code, but we're not dumb). Absent from this album is any song off of "Situationist Comedy" which was recorded after this CD was recorded.

If you are looking for tight musicianship, amazing production and an overall great set, buy the new Led Zeppelin live disc or DVD. If you're looking for fun and everything else you're gonna want this one. (Robert Plant can't tell a joke anyway).

The Assistant: We'll Make the Roads By Walking