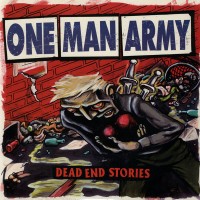 As a general fan of music, I find few things more exciting then discovering a new band that you love to listen to. One Man Army was my discovery for the year 2000.

I was at a Less than Jake show, having a few drinks when I see the banner drop for One Man Army. I had heard of these guys in conversations with friends and acquaintances but never really paid much mind to them. So here comes walking on to the stage one of the ugliest bands I've ever seen. I mean when you think "gritty punk", these guys fit the bill. So I'm thinking, damn it, another piss-poor, speed-punk band. Wrong!

If you have never listened to One Man Army, you are seriously missing out. If you were to mash together the Swingin Utters and Green Day (Lookout Records Green Day), One Man Army would be the product oozing out.

So after an amazing set of rockin' bay-punk tunes, I decide to invest a little money in OMA's debut album, 'Dead End Stories'. For that evening, I probably listened to this album 10 times. I shit-you-not when I proclaim that every song on this album is enjoyable. And for someone with a short attention span such as I, that is quite an accomplishment.

Now, to give you the skinny on the album. Its starts out with "Another Dead End Story", which gets the album going on a feverish pace. Other favorites on the album include "They'll Never Call it Quits", "One in the Same", "Another Time", "Fate at Fourteen" and my personal favorite "Big Time".

If you like the bay punk sound, or for that matter just good music with interesting stories and messages, definately check out One Man Army. You won't be disappointed.

Good Riddance: Ballads From the Revolution

Carly's Day Out: The Past Is Behind Us