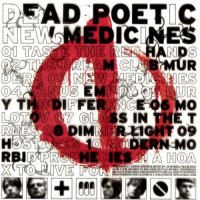 "There's a glossary of dirty words for people just like you.
And only for people like you, I reserve the words:
Backstabbers and money whores, and dirty rotten millionaires
that always wanted more."

This is the chorus of "Taste The Red Hands," the first track off Dead Poetic's New Medicines. While I give the band points for using the word "whore" in a song and not having it be a cheesy pop-punk track about an ex-girlfriend, I must also point out this chorus' main flaw - it tells you exactly what the band sounds like for the rest of the album: