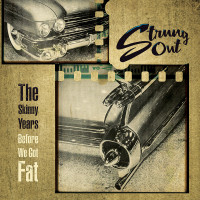 Well let's go all the way back in time to when Strung Out was just starting out... before they signed to Fat Wreck Chords (hell, before my own 7th birthday). The Skinny Years: Before We Got Fat was realeased in 1998 but was recorded back into the late 80's, early 90's.

Me, being a fan of Strung Out I think this album is good, but if you got into Strung Out in the era of their latest albums such as The Element of Sonic Defiance or Twisted By Design, you may be a little hesitant to like after hearing this album. I mean, I don't know your taste in music, but it does have a touch of the old Descendents punk rock.

Songs such as "Mike's Song", "Perfect World", "Strung Out", "Disney Land", and "Adam" catch my ears, when some of the other songs may leave you a little behind. I'm not trying to pick on this album, I love it in all... but I gotta give you the truth. If you're into Strung Out enough, and do not currently own this album, I suggest you get it, but really it's not an album to put at the get right away list.