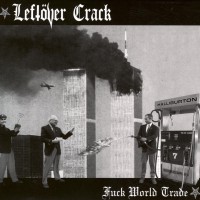 I've never been so offended by a band in all my life. With a band name promoting drug use (and sodomy), with an album title disrespecting this great nation that so many heroes have died to protect, and with songs about murdering our fine boys in blue, who risk their lives everyday to make America a better place... quite disgusting. Oh, sorry, not disgusting... but quite the opposite. Would that be progusting? After three long years of waiting for Leftover Crack to release a new full-length, which included leaving the roster of Hellcat Records on bad terms, being banned from nearly every venue in New York City, signing to Alternative Tentacles Records, and having this record banned from main chain stores before it was even released, Fuck World Trade is here, and is incredible.

The record starts out with "Clear Channel (Fuck Off)", and just like "Mediocre Generica", has the classic same intro, which goes blazing into a roaring guitars, and screaming vocals. The song includes a personal "fuck you" to the likes of bands that show what is wrong with music today: Nickelback, Creed, Britney Spears, P.O.D. and Rancid. To include Rancid in that line of lyrics... I give LOC mad props for. To be on Hellcat Records (owned by Rancid) for years, to have Brad Minus (an ex-roadie for Rancid) in the band, which Rancid named a song after, and being in F-Minus (who is still on Hellcat), that's just incredible ballsy, and they get a high-five in my book.

"Life Is Pain" shows the band playing their fine brand of ska-punk on this disc. It's a song about how people should stop breeding, and polluting the earth. Funny how the songs goes, because I wrote an essay about the same thing, and how abortions should be mandatory years back in school, and after getting an "A" on the paper, was suspended from school for a week. "Burn Them Prisons" is a conspiracy song about cops caging every possible human they could, and to take control. "Gang Control" (originally performed by Ezra's band Morning Glory) has some new lyrics, and is a top-notch ska-punk tune. N.W.A. would be proud, with the line in the chorus of "Fuck The Police".

"Super Tuesday" is next, and has way too much spoken word pieces inserted into it, which makes the song somewhat skippable. "Via Sin Dios" (or "Go With God") is the sequal to the Choking Victim song "In My Grave", and though it contains no ska at all, it does have Anti-Flag screaming the chorus "six feet down and underground", which I'm sure will piss off 90% of people who call themselves "punk". The anti-bible track "Feed The Children (Books Of Lies)" comes in next, and kind of hits you in the heart with "No more books of lies instead of food' the hungry criiiied". "One Dead Cop" is about killing cops, and it's a good song. "Ya Can't Go Home" is a slow ballad, which is semi-reminiscent of Thursday in the first 15 or so seconds of the song... a song which should have been cut from the album.

"Rock The 40 oz." -- everyone has heard this song, but it's done slightly better here, with more rock, and some quirky violins. "Soon We'll Be Dead" is another slow ballad, but a million times better than "Ya Can't Go Home". The song features The World / Inferno Friendship Society jamming with LOC, and you can somewhat say this song might belong on a Flogging Molly record. "Gringos Son Puercos Feos" is a catchy song, but seems to drag just a tad bit. The record closes with "Operation: M.O.V.E.", which is the best track on this album. The song is about a team of police who burn the house of peaceful protestors, and as they struggle to leave the house, they are executed by a firing squad at the door. The violins, guitars, screaming, everything in this song... is fantastic.

To end, Fuck World Trade is the best thing to come out with this Crack Rock family of bands, and is a definite contender for best album of the year. My only complaints, which leads this to not get a full 10 score, is "Ya Can't Go Home", and "Super Tuesday". If they cut off "YCGH", and put the original version of "Super Tuesday" on the album, this would be a mint-perfect record.

Very much recommended to fans of music everywhere.