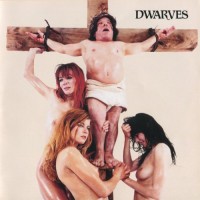 Sympathy For The Record Indust

Let's start off by saying that the controversy and legend surrounding The Dwarves is one unmatched by any band in music today. The stories of decadence and debauchery have long overshadowed the band's career have even garnered some hatred on themselves for doing and saying what they do.

Building on 2000's Come Clean, Must Die furthers the band's experimentation into other genres of music, and is more successful than I could have ever anticipated. The seamless amalgamation of surf to hardcore to punk to hip hop, and even chant and art rock, is perfectly orchestrated. The fifteen-track effort (fourteen of them new, the other a re-recording of "Dominator") flows like no other, and with Gary Owen's well-written announcements directing your eardrums towards the directions of the songs he appears in and between. The sequencing on this disc is masterfully done by and takes the listener on a voyage into Blag Dahlia's mind.

Musically, The Dwarves have never sounded better, on tracks like "Dominator" and "Go!" the drums amplify the speed and brevity they are known for. The short guitar solos add atmosphere and are pulled off with precision. The single, "Salt Lake City," is hands down one of the catchiest songs I've heard all year, and features guest vocals by The Offspring's Dexter Holland, and I would expect this song to be played on the radio. "FEFU" is a hard rock song reminiscent of Nine Inch Nails and even a tamer Marilyn Manson song, whilst "Christ on a Mic" incorporates a church organ and vocal choir verses and then a polka-esque hardcore chorus, and it somehow sounds right. The new frontiers of rock The Dwarves are taking make Must Die one of the most original releases of the year.

Lyrically, Blag Dahlia shines, and shows no signs of slowing down. On "Another Classic" he proclaims: "We are the original ruling class in the land of wax / Undefeated sonic champions to be exact" showing that he can convey his conceit to the audience better than Jay-Z. The battle rap "Massacre" berates the fact that punk music is now at the forefront of pop culture, and his message to the bands partaking in this is humorous and unmistakeably witty. Don't worry though old fans, traditional Dwarves lines like "I'm coming to fuck the bitch and go" and "Susie smears her lipstick, it tastes like daddy's cum / Johnny's in a backroom getting sucked off by his mom" appear and will satisfy what the band has made their name doing.

The bottom line is The Dwarves Must Die is one of the best releases of the year, and fans of real punk music should pick this up, and if you are one of the haters of the band, give it a spin, youâll realize what you've been missing all these years.

Thank you Dwarves, and please do not die, the world needs you.