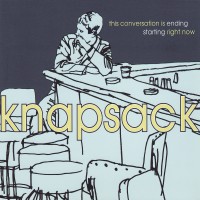 I'm sure a fair amount of you enjoy, or at least are familiar with the band The Jealous Sound. You may or may not know that lead singer Blair Shehan had a band prior to The Jealous Sound, that band was Knapsack, and this is their finest work.

Their career as a band spanned only a meagre three albums, but the talent and cohesiveness of this band can't be measured in the number of albums in their catalog. Because of the success of the Jealous Sound, Knapsack are often overlooked, but this album will let you know exactly why they're not a band to be cast over.

The place that Knapsack really draws you in is with Shehan's voice. It's a talented voice, but at the same time something you feel like you can sing every word along with. It's honest, and it's strong, and unique in a way you don't find with many indie rock bands on the scene today. The voice is something you can find yourself identifying too, and that's how the lyrics are tied in as well. It grabs you as soon as you hear it, and takes you on a ride throughout the albums duration. The sincerity of Shehans voice puts every listener in a place where they understand what this music is about. The lyrics are intelligent, without ever being pretentious or clichÃ©. "The shake of the shame, But it hangs around your name, for the first time you're afraid, And you take what they left, choke on their success, but you're nothing anyway."

The musicianship is tight, and cohesive. The guitar isn't too complex, the drumming isn't exceptional, and the bass isn't overpowering, but it all just fits. Knapsack have even incorporated some quite uncommon instruments into this record, including sleigh bells and an organ. These instruments fell right at home in the music, they don't feel forced as some bands do. The main problem with bands like this is usual feeling of "haven't I heard this song before?" "No," is the answer here. With the added incorporation of a cello, and a violin, there's enough distinction between each song to keep things interesting. Clocking in at around 30 minutes, you won't find yourself having to skip anything here.

This is solid, straightforward indie rock at it's very finest. Music you'll be humming and singing along to as long as your CD will last you. Standout songs are "Katherine The Grateful," "Cinema Stare," and "Change Is All The Rage."

If you enjoy bands such as the Jealous Sound, Rival Schools, Far, and Benton Falls, this is something you'll be doing yourself a favor to purchase.