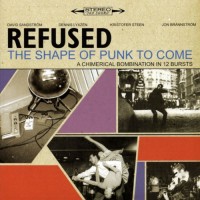 Just when I was starting to lose hope in Epitaph, they pick up Refused - and release The Shape of Punk to Come (which is I believe their only release on Epitaph, aside from the New Noise Theology single). That was three years ago. Refused has long sense been dissolved, but they have left their make in the history of punk rock. It's not often I think a band should get a "10", usually it has to be really fucking good (like Ignite's A Place Called Home) or damn influential (like Bad Religion's Suffer or anything from the Dead Kennedys). This hasn't exactly been an influential album, or at least not yet.

While most bands have to stay true to their roots, Refused decided to be different. Powered by their strong political beliefs and their already popular hardcore sound (similar to Earth-Crisis), they added another dimension to their music. You can't really put a finger on it... but it's a mix of techno, violins, very distinct guitar riffs, and everything else you'd expect not to hear in a punk rock record.

You have to admit to yourself that punk, especially hardcore punk, is a very stagnant genre of music. I love it as much as the next guy, but musically it's not going anywhere. Refused is/was hoping to change that. This is one of the most unique albums I've ever popped into my cd player, and you owe it to good music to check out at least a few good tracks. Their single, New Noise attracted me to the album. It's a 5-or-so minute song, which was the first odd thing about it, and it had a nice bass/guitar line to start it off. About 50 or so seconds through the song, it went fucking techno! I wasn't sure if I was supposed to hate it because it was different, or love it. I kept listening. One minute and three seconds later, you hear Dennis LyxzÃ¨n yell at the top of his lungs: "Can I SCREAM?" The song has my attention, and then I wanted to check out the rest of the album.

I didn't even need to go past looking at the titles to understand this is some politically charged individuals. With songs like "The Apollo Programme was a Hoax" and "The Deadly Rhythm (Of the Production Line)"... I knew it'd be interesting. Besides their strong beliefs, the music itself is incredible, as I mentioned above. I literally got goose bumps whenever I'd listen to the CD all the way through. I must admit, that never happens when I listen to a NOFX CD. With short narrations from the lead singer, rambling about such matters like how "capitalism is like organized crime", I fell in love with this album. Calling it just "punk rock" doesn't do them justice. Just call it music. And shit, I really hope this is the shape of punk to come.

You might always want to check out their website, it's got a ton of interesting information including their "final communiquÃ¨". Here's what they have to say about their own record, and despite being very condescending... I can't help but agree:

Stronger than ever and with their third album "The shape of punk to come" they're showing us what the punk is supposed to be. They have spent months in the studio, Tonteknik, together with Eskil LÃ¶vstrom, and out came the best record ever. No boasting! They deliver revolutionary songs with intellectual beats that goes deep and get their influence from many different sides. They are innovaters and creators of the new noise and they refuse to stay at a stop.

Dennis LyxzÃ¨n is now currently with his new band, the International Noise Conspiracy, which is not a bad band at all. But they're not trying to be another Refused. So, this is the last full length album you'll most likely ever hear from these guys again.