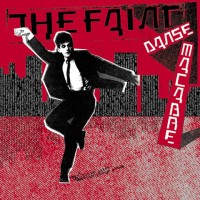 So I have a great summer job. Really. I'm a camp counselor for kids 5 to 7 years old. It's not the most "punk rock" thing in the world, but for a guy who is about 99% sure he's majoring in the Education field, getting to work with kids doesn't hurt. This week has been really hard on me, so far. My kids have been pretty bad, misbehaving at every turn [on Monday, I actually had one kid bite another kid because he tried to take his rubber bands -- don't ask]. I've come home every day completely exhausted. To add to my general uncomfort, I recently joined a gym with two of my friends, and we try to work out 3 nights a week. Tonight was one of those nights. We worked out for around an hour, when I just couldn't do anything anymore. My body was at the complete state of exhaustion, I felt like I was going to collapse, throw up, or a combination of the two. I dragged myself to my car and somehow managed to drive home. As I stumbled through the front door, a package was waiting for me on the kitchen table -- the new Faint album.

For those of you who don't know, The Faint are a synth-punk band from Omaha, Nebraska [the same stomping grounds as Bright Eyes, Lullaby For The Working Class, and Cursive]. For the uninitiated, think Duran Duran with really big balls. You've been cheating yourself out of incredibly good dance music with incredibly sexual lyrics if you haven't picked up their awesome second effort, "Blank Wave Arcade." But I digress.

My first instinct? Open the fucker up and throw it on the stereo. As I tore through the packaging, I was amazed at the energy I had gained back just by receiving this CD. What mystical powers lay inside the case? As I opened it up, I was treated to an all black CD with a black tray and a black booklet. Very hep. As I travelled down the basement stairs to my trusty computer, I put the CD in and waited for it to start with baited breath. I had yet to hear any of the new material, as I missed the band on their earlier summer jaunt due to being in Sweden [fucking Sweden...]. I have seen the band live twice before, and they are incredible live, with a stage show that is not to miss. Some of my friends went to the show in Chicago back in June and came away with a bit of a mixed reaction for the new material, which was played very sparsely throughout their set. Not having heard it myself, all I knew is what my friends told me: "It's darker. Much much darker." With that statement, I would have to agree.

With their last album's underlying theme being sex, one wouldn't expect too much more for the next album. Leave it to The Faint to mess with your head. The whole album this time around has a much darker atmosphere than it's predecessor. From the cover art to the track listing fonts, from the song titles ["Let The Poison Spill From Your Throat", "Ballad of a Paralysed Citizen"] to the lyrics themselves ["The drones work hard before they die", "Fleshtone shards fly by wild/They fill a plastic bag with the parts inside"], this CD deals with much more disturbing subject matter altogether. The running theme seems to be one of pain and death, and figuring out how to deal with it in a way only The Faint can. The music is similar to "Blank Wave Arcade" in some of it's new wave-ish tendencies, but there are some more orchestral parts [due in part to Cursive's newest member, cellist Gretta Cohn playing on three of the nine songs]. The band has definitely matured within their genre about as much as any one band can [although with The Faint, you never know]. The catchiness of the majority of the songs is as prevelant as ever, and this album will certainly give "Blank Wave Arcade" a run for it's money in danceable-ness.

Oh yeah, and after I put this album on, I lost any sense of sleep deprivation that I had been experiencing. This album completely rejuvinated me. I feel like I could stay up for another week straight by only listening to this album. Saddle Creek has done it again, first with Cursive's newest EP and now this. I feel sorry for any band that has to follow these guys at a show.