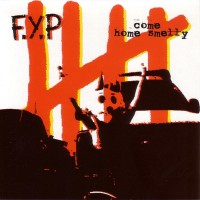 This band consistently blows my mind. Not because they're amazingly great or anything like that, it's mostly because they can't pick one style of punk to play from one song to the next. Take, for example, this CD.

The first song and title track is a perfect pop-punk song, clocking in at exactly 2 minutes. I love it. Then you have track two, "West Psalm Beach." It goes all hardcore on us out of nowhere. Then, on "Shirts and Skins," the band turns back into the Queers again, hammering out another 2 minute pop-punk diddy. This happens pretty much for the rest of the 8 tracks on the CD. This band has been around forever, and it still seems like they're caught in an identity crisis. If you're a fan of the Queers or Screeching Weasel, you'll like about half of this disc. If you're into more '77-style bands, you'll fall in love with the other half of this CD. Honestly, this sounds like a split CD between two different bands. Go figure. Oh, and in case you were wondering, 7 of the 8 tracks are unreleased, and Josh Freese from the Vandals plays drums on this release.

The Plus Ones/Travoltas: Going Dutch