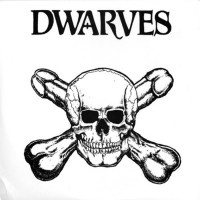 Free Cocaine manages to be both one hell of an album and one really crappy record. However, the Dwarves and their fans know how to keep their priorities straight.

Hopefully you know who the Dwarves are, but I'm sure there are a few people who mistakenly clicked on this instead of the Victory review next to it. So in a nutshell, Chicago's the Dwarves are one of the wildest, craziest, and best punk bands ever. Their infamous and pornographic songs and shows have secured their place in punk rock mythology. I think this one lyric can sum them up completely: "Gimme the things that drive me insane / Teenage women and free cocaine."

Free Cocaine collects a bunch of their early stuff from between 1986 and 1988. And I do mean a bunch, with 39 tracks clocking in at about fifty minutes. The entirety of the Lucifer's Crank 7" and the Toolin for a Warm Teabag 12" are included, as well as a bunch of rare, alternate versions, and unreleased stuff. You know the drill.

Do keep in mind, this is some of their earilest stuff. It isn't nearly as clean as the Dwarves usually are, and the Dwarves usually aren't that clean anyway. These are rough and raw tracks with more emphasis on attitude than production. Plus, it's riddled with a bunch of out-of-place audio clips that usually involve them wrecking some radio station.

However, if you can live with some audio crackling, you have one extremely rocking album. Free Cocaine isn't the Dwarves' finest release, but it's still a punk classic nonetheless with more bang for yer buck. Get it if you know what's good for you.

Oxymoron: Fuck the Nineties...Here's Our Noize!