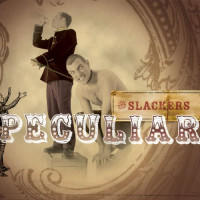 The Slackers take a few risks with Peculiar. Not in terms of the style mind you, as the band continues to be pretty much peerless in their approach to modern ska music, but in what they chose to include on this record. Most glaring is the fact that the lyrical content of 2004's International War Criminal EP appears here in its entirety. On paper, the fact that essentially an entire album side has been spoilt by two years of prior exposure is quite a letdown. Granted, that EP had a fairly low print run and essentially no proper distribution, but Slackers fans have a knack for gobbling up every side project, limited release and foreign record the band puts out. For those of us who make up the core constituency of Slack, seeing those songs listed again is somewhat disheartening.

However, this is a band with a knack for making things work where others have failed, and after a few spins of Peculiar I not only don't mind the inclusion of the War Criminal tracks, I welcome them. The band took the smartest path and re-recorded most of the material. Only while a lesser band would simply have simply tightened up the performances, the Slackers took a page from their jazz forbearers and reinterpreted their own songs. Suddenly War Criminal isn't a useless double, it's an alternate version. It's the preimage. The embryo.

What gives Peculiar such a wonderful sense of life is the fact that it was recorded live in Ernesto's, a venue in the Netherlandic town of Sittard. As anyone who's heard the band's live albums can attest, there's something about the Dutch club that brings out their best. In particular, this record follows up the brilliant live recording Upsetting Ernesto's, a concert with Upsetter Glen Adams and lovers rock chanteuse Susan Cadogan that's among the band's greatest output. Compared to it their recent studio work, 2003's Close My Eyes in particular, seems dreadfully muddled. While Peculiar isn't a live album, the band turned this club into their studio and finally manage to strike a balance between their live show and their studio work.

Top that off with a change in the ranks. This the is the band's first proper full-length with guitarist "Agent" Jay Nugent and drummer Ara Babajian, even though the two have now spent years as part of the group. Furthermore, Marc Lynn, now listed as an "additional player" rather than a full-time member, has significantly scaled back his contributions. While Q-Maxx can be heard among the backing vocals, the toasting of songs like "Real War" and the mad preacher of the "Church of Slack" seem to be relics of the past.

Peculiar revisits much of the thematic ground covered on Close My Eyes to greater effect. Frontman Vic Ruggiero again seems to be eulogizing a parent, and while "86 the Mayo" is not quite as direct as "Mommy" it's such a better realized song. There's a that sense of focus that keeps the material here from seeming redundant. The political slant that seemed born of frustration on Close My Eyes is rather empowering this round. The reworking of "Propaganda" is brilliant, from the perfect reggae response singing to the tastefully applied vocal effects. Glen Pine's taken over some of the vocal duties in "Crazy" while Dave Hillyard injects a wonderful sax solo to the song. "International War Criminal" itself is slowed from the EP version, and given room to breathe the lyrics seem to hit their political targets with greater force.

Peculiar also finds individual band members stretching their legs a bit more. "Mountainside" showed us years ago that trombonist Glen Adam's has a killer set of pipes, but the soulful "What Went Wrong" is unlike anything he's done before. Ruggiero similarly includes a song that feels like a solo effort in the form of the touching "I'd Rather Die Happy." The Motown-inspired pop song "Set the Girl Free" finds the band as a whole exploring new territory. Fans of the band's debut should be very happy with "Sauron," as it's reminiscent of the instrumentals from that era.

More focused than Wasted Days and simply outclassing everything that Close My Eyes attempted, Peculiar ranks up with Redlight and The Question as one of the Slackers' best recordings. That it even approaches their live material in quality is a feat in itself.