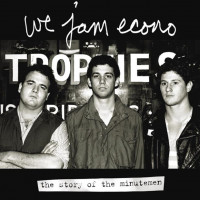 The Minutemen were truly one of the great American punk rock bands, and though you can't trace their sound to a specific scene or a specific group of bands like you can with say, Minor Threat or the Dead Kennedys, what the band contributed was nonetheless immeasurable. D.Boon, Mike Watt and Hurley expanded the vocabulary of what punk and hardcore could be. Like the Clash with ska and reggae, or Billy Bragg with folk, the Minutemen gave punk new realms of creativity that allowed it to persevere for these past three vibrant decades.

In modern terms, there are few bands who could be directly traced back to their sound, though watching We Jam Econo, there is no shortage of musicians who took the Minutemen's creativity and pushed it into different directions. From the Red Hot Chili Peppers' Flea, to Fugazi's Ian MacKaye, to Sonic Youth's Thurston Moore, there are no shortage of genre innovators who wished to pay tribute to this band, as did the directors of the lovingly rendered documentary and tribute to the band's late front-man.

We Jam Econo - The Story of the Minutemen is about the band of course, but is also a distinctive story about the American punk and hardcore scene of the `80s; an era between the major label rush of the late `70s and the one that followed in the `90s, probably the most fiercely underground era in punk history and the one that created many of the notions that seem permanently intertwined with the genre today; from independent labels to self-promoted tours. Following the Minutemen, as told by the band's two surviving members, the film begins with the incredibly strong childhood friendship between Watt and Boon, which eventually blossomed into the Minutemen. Watching the film is that much more poignant as the lack of modern interview clips with Boon constantly remind you of his tragic death at the age of 27 two decades ago.

Like most band documentaries, the story is assembled from anecdotes, with no shortage of high-profile musicians stopping by to share stories about the band members and their influence. Besides Fugazi's MacKaye, who recieves significant screen time, notable figures from the period also stop in -- three Black Flag members (Dez, Henry and Chuck), X's John Doe and even bands who influenced the Minutemen like Wire and Richard Hell. Besides the funny and often touching stories, the film is interspersed with a variety of remarkably well-preserved live footage from throughout the band's career.

The real star of the film is certainly Mike Watt, however, who spends much of the film speaking to the camera as he drives down the street in San Pedro, the same town where the band formed nearly thirty years ago. Watt is brutally honest and often funny as he describes the scorn the band recieved from hardcore kids back in the day, and talks with reverence about his friend. And Watt has been a true friend over the years, dedicating every single post-Minutemen release to Boon and allowing one rare licensing of the Minutemen's music to Volvo, but only to provide the money to Boon's father for medical care.

Plexifilm has assembled a definitive package for the DVD, acting not just as a vehicle for the film, but as a comprehensive visual document of the Minutemen. Besides the film itself, the disc packs in three of the band's rare music videos, dozens of interviews with band members and friends and a packed bonus disc featuring 62 live tracks recorded at three live performances. Even without the film, the bonus features alone would make this worthwhile to any fan of the band.

While nothing will ever top hearing Boon sing about how "punk rock changed our lives" on "History Lesson - Part II," this is a sad, but wonderful little film about a wonderful little band and highly recommended for fans of the Minutemen and American punk rock.

Boys Night Out: Dude, You Need to Stop Dancing DVD