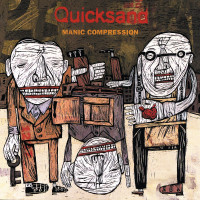 'Ahead of it's time' is an understatement concerning this band. I am fully convinced that if this album came out in 1999 instead of '95, Quicksand, along with a little help from Tool, could have single-handedly save hard rock from it's recent demise into the dark clutches of rap-metal. Alas, it was released in '95, got very little, if any, mainstream recognition, and the name Quicksand has nearly faded into obscurity, ocassionally resurfacing in mention of the members' new bands.

This album is 12 songs of dark, borderline depressing lyrics, and hard alt-rock that would probably be somehow considered emo-core nowdays. Heavy, crunching guitars are often complimented with a different, melodic guitar part to make the sound stand out among other acts of the time. The drumming is excellent as well, pounding harder than most thrash metal bands could think of. The vocals are not as you would expect them. Very little screaming or growling. Instead, he sings with an almost emo-sounding pitch. Quicksand's lyrics are downright sad if you read them without the company of the music.

"Rain, it's rain again, rain down on my parade, I'm wrong,you're right, It's not what you would do, Walk one mile in these shoes."- East 3rd St.

Every song is unique in it's own way. Some are up tempo like 'Blister', while others like 'Landmine Spring' are meloncholy and slow through most. There really isn't a predictable moment on the album, which keeps it fresh everytime you pop it in your stereo.

I believe I heard one of the Beatles say something like this once;

'We may not have been the most talented, or the most intricate of musicians, but even today, our songs sound new.'

Quicksand could say the same thing. This album is a must own, in my opinion, for any fan of heavy rock, emo, or metal. It can stretch into any one of those genres, and blow most of the competition away.

Dropkick Murphys: The Gang's All Here